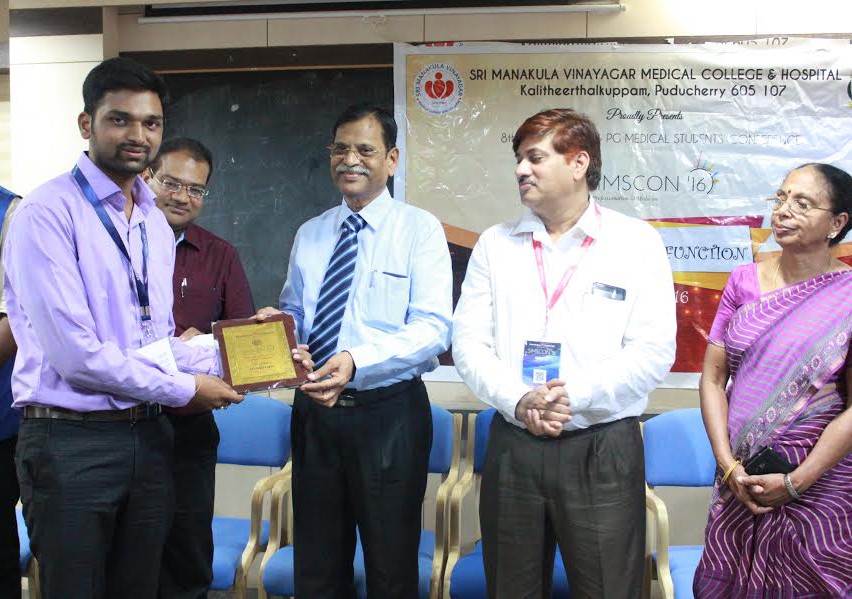 The students of MGIMS have once again brought laurels to the institute. They seem to be highly motivated in terms of their interest in research these days. The students are frequently representing MGIMS on various regional, state level and national platforms to present their work.

Recently 20 students from MGIMS participated in a National level undergraduate students’ conference named SIMSCON 2016 that was organized from 28th and 30th July 2016 at Sri Manakula Vinayagar College and Hospital, Puducherry. Four students presented their research work done under the grants provided by ICMR and MUHS.

It is a matter of great pride to mention that Mr. Akshay Yadav (2013 batch) was awarded 2nd prize for his paper entitled "Impact of Yoga on stress experienced by Medical Students- an Interventional study".  His paper won him a cash prize of 3000/- and a gold plated memento along with a certificate of appreciation from the organizers. Dr. Ruchi Kothari, Assistant Professor, Department of Physiology was his guide for this ICMR funded Short Term Studentship project.

The rankings of other participants from our college were respectively -Mr. Vidit Panchal on the third position, Mr. Anurag Rathi was sixth and Ms. Anagha Potharkar secured tenth position among the other contestants.

Of late, Mr. Vidit Panchal (2013 batch) had also bagged 3rd prize for his presentation on “Assessment of visual evoked potentials during pregnancy: A normative study” only some time back at another national level undergraduate conference, INVENTUM 2016 which was held at Pravara Institute of Medical Sciences, Loni, Maharashtra from 28th to 30th April 2016. This oral presentation was a research done under the ICMR STS project executed by Ms. Chetna Periwal (Batch 2012) under the guidance of Dr. Ruchi Kothari.  To add another feather in the cap, Mr Vidit also won 2nd prize for his "Medslam" presentation on “Faecal Microbiota Transplant” in the same conference.

Owing the success to the teachers of the institute, Mr A Yadav said, “Shining on such a big platform where there is a competition with 110 other participants from 30 different colleges and 6 different states of the country, definitely requires enough courage, confidence and academic calibre and majestic acumen which the mentors strive for and have successfully inculcated the same in their mentees”. “I can’t thank them enough”, he added.