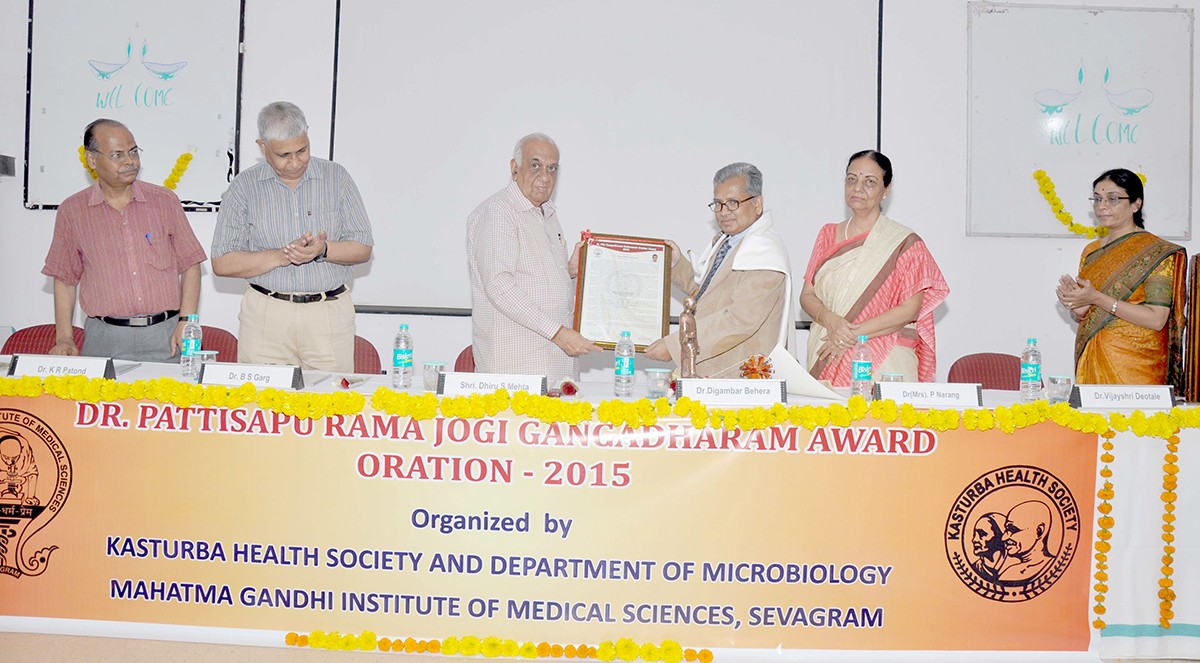 Dr Digambar Behera, Senior Professor and Head, Department of Pulmonary Medicine Post Graduate Institute, Chandigarh and Ex. Director LRS Institute of Tuberculosis and Respiratory Diseases, New Delhi was conferred the PRJ Gangadharam award for the year 2015, the 16th in the series. This award was presented at the hands of Shri D S Mehta, President Kasturba Health Society at a program organized by the Kasturba Health Society and Mahatma Gandhi Institute of Medical Sciences on 3rd September 2016.

Dr Mrs P Narang, Chairperson of the award committee, informed that the award was instituted at MGIMS by Late Mrs Shakunthala Gangadharam in the fond memory of her husband Dr PRJ Gangadharam, who was an international figure, having devoted all his life towards tuberculosis research and control. Mrs Gangadharam chose MGIMS as her husband was greatly inspired by the tuberculosis work being carried out in the institute under the guidance of Dr Sushila Nayar, Founder of MGIMS. The award is presented annually to an Indian scientist who has contributed substantially towards the fight against TB. The award carries a citation, a certificate of honour and cash of Rs. 25, 000/-.

Dr Behera is an internationally acclaimed Respiratory Physician, teacher and researcher. He has distinguished himself with contributions of innovative nature and exceptional achievements in the field of Respiratory Medicine. In tuberculosis, Prof. Behera’s contributions in the Revised National TB Program have been exemplary. He has been the Chairman of the National Task Force for involvement of Medical Colleges in tuberculosis control. Under his able leadership and persuasive abilities the program has been popularized and practiced in over 400 medical colleges and institutions in India. He has also been a part of many newer initiatives and policy decisions of the program. As the Chairman of the National Operational Research Committee for tuberculosis, he has been instrumental in taking decisions on many path breaking operational issues.

Shri Dhiru S Mehta ji, in his presidential speech informed that TB is a major public health problem with India carrying one quarter of the global burden of the disease. He further emphasised that if we want to see the end of it, all clinicians, whether in the institutes or practicing in private, must remain committed and follow the correct guidelines; laboratories must continue diagnosis and research with passion and honesty; administrators must give weightage to their findings and commit themselves to true and proper implementation of policies by ensuring resources, provisions and finances. Above all the patient must commit themselves to taking the full course of medicines, uninterrupted in order to avoid the disease from becoming resistant to drugs.

Replying to the felicitations, Dr. Behera spoke on “TB control in India, where are we?” He illustrated and enumerated all the efforts put in by the government of India to control tuberculosis in the country and how under the Revised National TB programme both the prevalence and mortality due to TB has been brought down by fifty percent and the incidence has also so decreased. The introduction of newer and rapid techniques like the Gene Xpert and Line probe Assay has not only made the diagnosis simpler but also helped in immediate detection of multi drug resistant tuberculosis.

TB is now a notifiable disease and it is the responsibility of all concerned with TB diagnosis and treatment to report each and every case to facilitate the government in calculating the exact number of TB cases in the country so that proper policy decisions under the National Strategic Plan could be taken to have TB free India by 2030.

Dr Vijayshree Deotale, Organising Secretary and Head of the Department of Microbiology, proposed the vote of thanks.