WHO conducts training for Polio Vaccine study at MGIMS 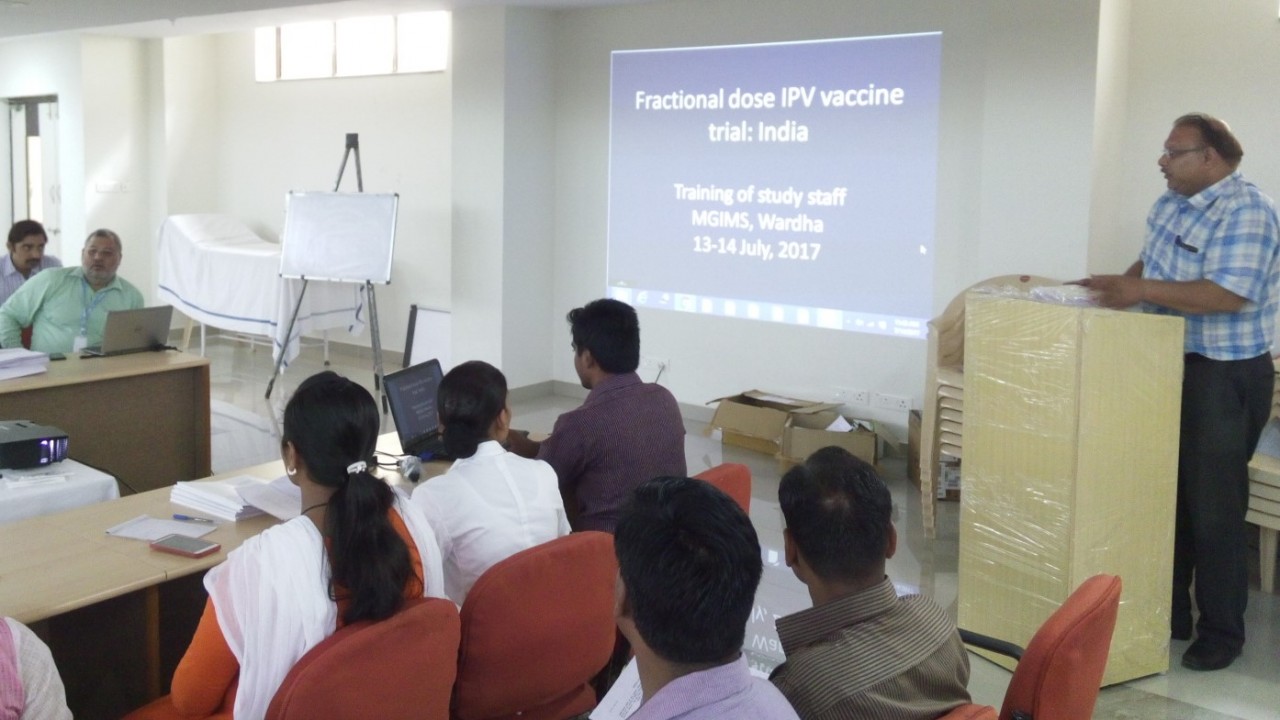 A team from World Health Organization (WHO) India country office completed a 3 days training for a path-breaking Polio vaccine study involving ICMR and Government of India at the department of Pediatrics, MGIMS from 13-15 July 2017. The study will evaluate whether a fractional dose of Injectable Polio Vaccine (fIPV) given via the novel intradermal route is safe and whether it really helps is building immunity against Polio.

Dr Mohammed Ahmed, the national research officer of WHO India office and head of the training faculty team, explained the need and rationale of the study in his introductory remarks. He explained, “With the eradication of Polio, the world is shifting from Oral Polio Vaccine (OPV) to Injectable Polio Vaccine (IPV). On 25th April 2016, the whole of India simultaneously shifted from trivalent OPV (P1+P2+P3) to bivalent (P1+P3) dropping the notorious P2 strain that was solely responsible for Vaccine derived mutated polio virus. Since the new babies born anywhere in India after this switch date wouldn't have had immunity to P2, it was very essential to start IPV in the national immunization schedule. Due to the worldwide shortage of IPV, India initially decided to give only 1 dose of IPV intramuscularly but later shifted to 2 fractional doses of IPV given intradermally to further cut down the countrywide IPV requirements. This was necessary to tackle the crisis of IPV shortage but didn’t have robust Indian data to support the usage.”

Thus, Indian Government urgently approached WHO & ICMR to conduct this study on safety & immunogenicity of Intradermal route of IPV. In addition, an alternate schedule will also be evaluated based on the assumptions that all the vaccines for which maternal Antibodies exist, work best when given a bit late.

It is a matter of pride and pleasure that Pediatrics department at MGIMS is one of the only 5 sites across India selected for this historic trial that is keenly awaited by the whole world.

In this study, in line with the vision of the institute to serve the underserved, safety and efficacy of a very cheap but novel instrument is also being tested that can be used even by semi-skilled or unskilled peripheral health care workers to successfully administer an Intradermal injection that's otherwise a quite difficult feat to achieve.