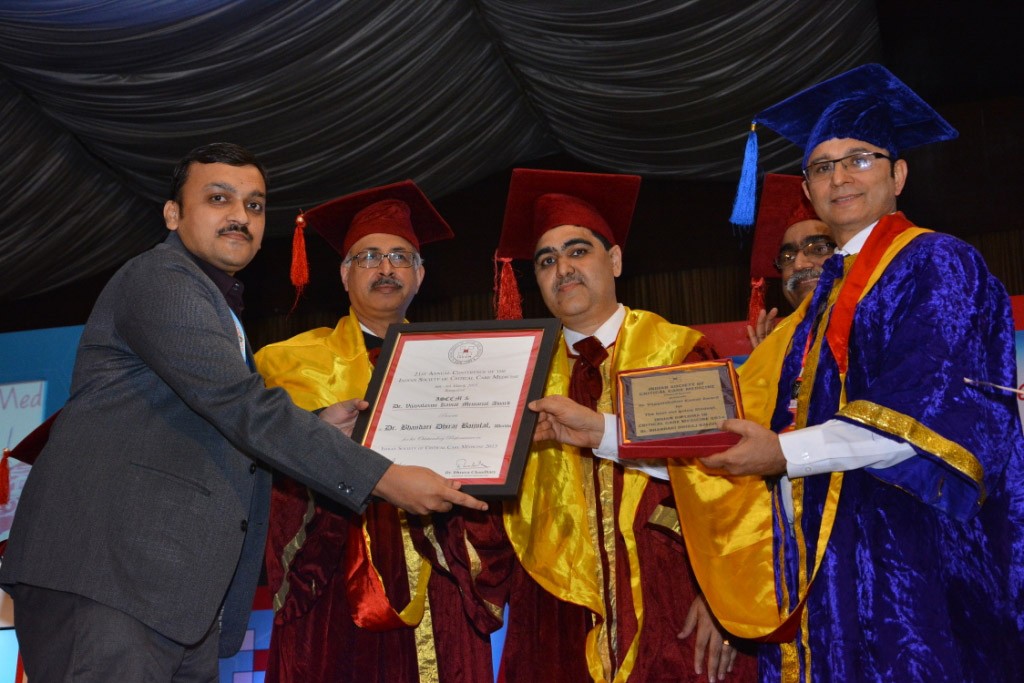 The 21st annual conference of Indian Society of Critical Care Medicine (Criticare 2015) was held at Bangalore in the first week of March. Dhiraj was invited as a faculty to tell the audience how best he would like to transport critically ill patients. “I did an evidence-based review on the best practices for transporting patients between and within hospitals and also spoke on how to adapt these techniques in resource limited settings, “said Dhiraj.

No sooner did Dhiraj obtained diploma in Critical Care Medicine than,  he was picked up in a young (aged <35 years) talent hunt competition. The Indian Society of Critical Care Medicine (ISCCM) selects three best presentations, countrywide, in this competition and asks the chosen ones to present their ideas in the national conference. ISCCM organizes this event to identify and encourage young intensivists in the country and gives them a platform to showcase their teaching skills.

Dhiraj was privileged to hone his skills at the Sundaram Medical Foundation, Chennai where he learned how to blend art and science of evidence-based medicine at the point of care. He worked under the tutelage of Dr Ram E Rajagopal, one of the stalwarts in the country who pioneered the intensive care medicine realm of science and also one of the founders of ISCCM. Dhiraj learnt how to steer his patients’ ship through the troubled waters to the safe shore, and how to keep nerves steady when the tides are high and stormy winds blow strongly. “Tides do not command the ship; the sailor does,”  his mentor would hammer the aphorism in his brain. And Dhiraj keeps on reminding himself of the metaphor whenever he is asked to examine critically ill patients. Chennai helped Dhiraj obtain rich experience of managing critically ill medical and surgical inpatients and use technology for snatching life from the tightening jaws of death.

”It is the first few hours of treatment that determine the life of a critically ill or injured person. The more quicker the doctor identifies the problem, faster is the chance of survival. And, that is the reason why intensive care medicine has become a prerequisite when it comes to saving lives,” Dhiraj explained the importance of intensive care..

“During my training in anaesthesia I realised I enjoyed managing sick patients in intensive care as well as anaesthetising high-risk patients in theatre. Both interests led me down the road of a career in ICM and cardiothoracic anaesthesia- the reason I chose Critical care as a career. My role is to take care of highly sick people and to make them go home again, a task I find  challenging and equally satisfying. I was lucky to have learnt evidence-based intensive care from the master of critical care and would like to apply my knowledge and skills to manage ICU patients in Sevagram. I love to teach and am looking forward to  creating a team that would work to improve outcomes in our hospital, It is essential that the training, talent and services of trained consultant intensivists be appropriately utilised in hospitals for the benefit of patients. “said Dhiraj.