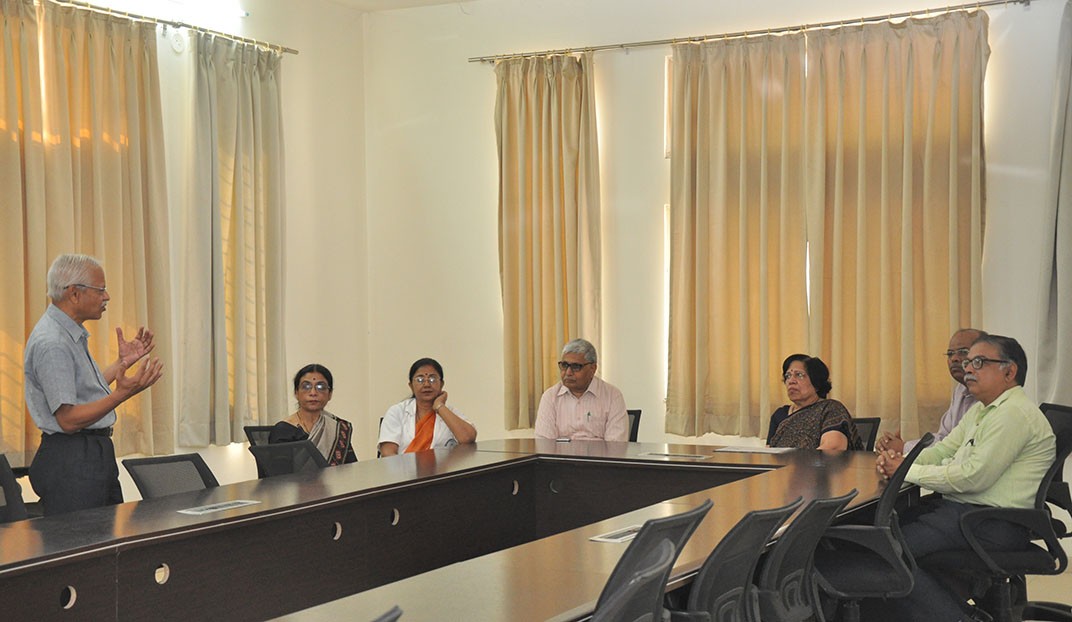 Taking Prime Minister Narendra Modi's ambitious Clean India Mission a step forward and to achieve total sanitation by October 2, 2019, the Centre has asked all ministries to implement a fortnight-long action plan every year to highlight their contribution to the initiative. The first fortnight of April has been assigned to the Ministry of Health and Family Welfare.

The Ministry of Health and Family Welfare monitors closely how the fortnight is celebrated, using online monitoring system of Swachhata Samiksha where action plans, images, and videos related to Swachhata activities are uploaded and shared.

At the behest of the Government of India, medical institutes, countrywide, are celebrating a fortnight long Swachhata Pakhwada—a clean India mission—in the hospitals.  Dr. (Mrs.) Gupta came to Sevagram to assess how MGIMS was using this campaign to keep its premises clean.

Dr. Gupta spent more than a day at Kasturba hospital Sevagram.  Dr. SP Kalantri, Director-Professor of Medicine and Medicine Superintendent of the hospital explained to her the rich history and the heritage of the hospital, and also narrated several unique features of the hospital.  Accompanied by Dr. BS Garg, Secretary, Kasturba Health Society and Dean KR Patond, Dr. SP Kalantri gave her a guided tour of the hospital. She inspected the three major buildings of the hospital—the Medicine block, the Mother and Child Wing and the Surgical block. She visited the outpatient departments, inpatient wards, Operation Theatres, Labs, Accident and Emergency department, and the support services such as Hospital Information System, Pharmacy, Laundry, Central Sterilization Department, and Dietary services.  She keenly observed how the hospital was collecting, segregating and disposed the biomedical waste. She also assessed the infection control measures taken by the hospital to minimize infections. Toilets in the public hospital are often known to be soiled and smelly; to her pleasant surprise, she found toilets remarkably clean. She expressed her profound satisfaction over the hygiene and housekeeping in and around the hospital.

During the Swachhata fortnight, the hospital had designed massive cleaning drives in all the hospital wards and hospital premises. Doctors, nurses and paramedics performed role-plays, sketched beautiful posters and took off rallies on the roads to explain to the patients and visitors why cleanliness is next to Godliness. They seemed to have succeeded in their mission.

The DGHS equated the spotlessness of the hospital with that of a private hospital where the patients belong to the elite educated class. “I am surprised to see how the hospital manages to keep itself so clean although it records close to 15,000 footfalls every day,” she said.  She also felt happy that the nurses and the attendants in the hospital not only knew how to keep the hospital premises clean but also actively practised this craft. “Your passion to maintain cleanliness is exemplary,” she said. “The labour rooms and the maternity wards of the public hospitals are typically associated with hospital odours. Your hospital is an exception. The air you breathe in the hospital is so clean and refreshing,” she said specially commending the Gynecology department of the hospital.

The DGHS also visited Anji, a village 27 km from Sevagram. MGIMS runs a rural healthcare center in the village. A bunch of MGIMS medical students interacted with her and explained their innovative initiatives aimed at health-educating the people, demystifying medical illnesses and spreading the importance of tobacco and alcohol de-addiction.

Dr. Gupta also met members of the self-help group in the village. The Community Medicine department of the institute had played a key role in their development. Dr. Gupta felt happy to see how women— barely literate, vulnerable and insecure and coming from rural and underprivileged backgrounds—had formed sustainable self-help groups and how their efforts were transforming rural India. She listened to their stories with apt attention as they shed shyness and hesitation to become keen representatives for their communities’ rights and aspirations. “Your courage and confidence are so inspiring, and you have been incredibly effective at creating change in your communities,” she lauded women for their efforts.