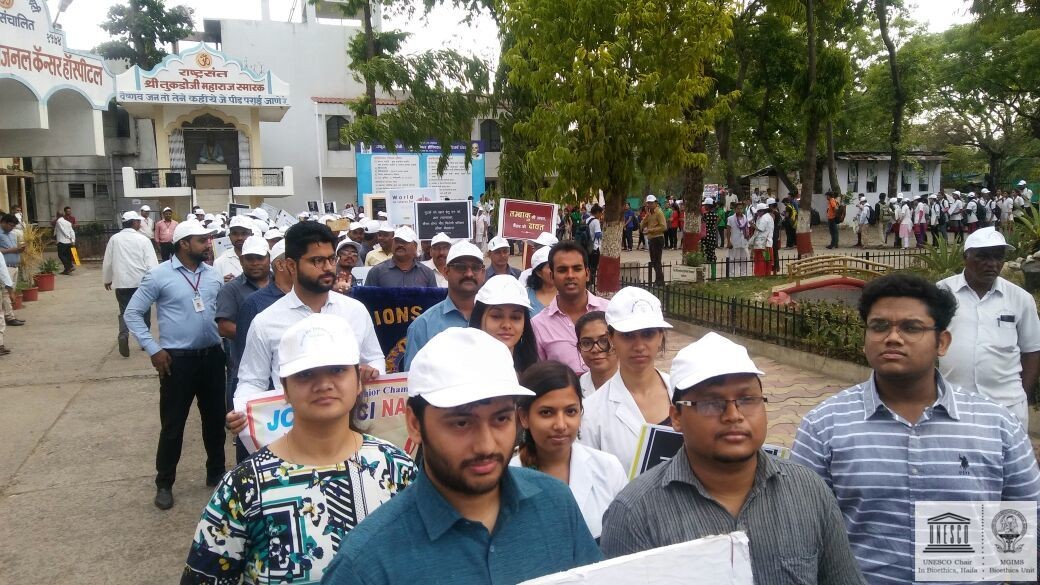 On 31st May 2018, the students of MGIMS Bioethics Wing celebrated the ‘World No Tobacco Day’ at Rashtra Sant Tukdoji (RST) Regional Cancer Hospital, Nagpur in association with the hospital.

The event commenced with a silent rally where approximately 200 medical students, residents and doctors marched around the campus of GMC, Nagpur. In front of RST Regional Cancer Hospital, the rally transformed itself into a human chain to spread the message against tobacco addiction amongst the public.

Later, a program was organized in the auditorium of RST Cancer Hospital for the medical fraternity in order to emphasize on the burden that the tobacco addiction brings along to the country. The program started with skit performances by students from various medical and paramedical colleges. The performance of the students wing of MGIMS Bioethics Unit was highly appreciated and one of the doctors said, “You should do this is all the nearby villages. If you work with dedication, you have the potential to change the society”. Knowing that the students were already actively working on de-addiction in the villages surrounding Sevagram, they were further applauded by the audience.

Dr. Poornima (Consultant, RST Regional Cancer Hospital) who works tirelessly for tobacco de-addiction delivered an inspirational talk. Dr YS Deshpande (State President of the Indian Medical Association and Chief Guest of the function) distributed certificates to all the participants of Students' Wing, MGIMS Bioethics Unit for their excellent contribution on this cause. The event concluded with Dr. Dasgupta's speech (Director, RST Regional Cancer Hospital) where he mentioned that, “If each one of us adopts a tobacco consumer and help them fight against their addiction, we can hope for a day when this menace will leave us forever.”

To explain harmful effects of tobacco, the students demonstrated the ‘Nicotine experiment’ in the OPD premises of the Cancer Hospital and delivered an awareness talk on the hazards of tobacco consumption. “The social evil breaks the patient and its family relationship, ruins their health and adds financial burden to the family”, emphasized one of the students.