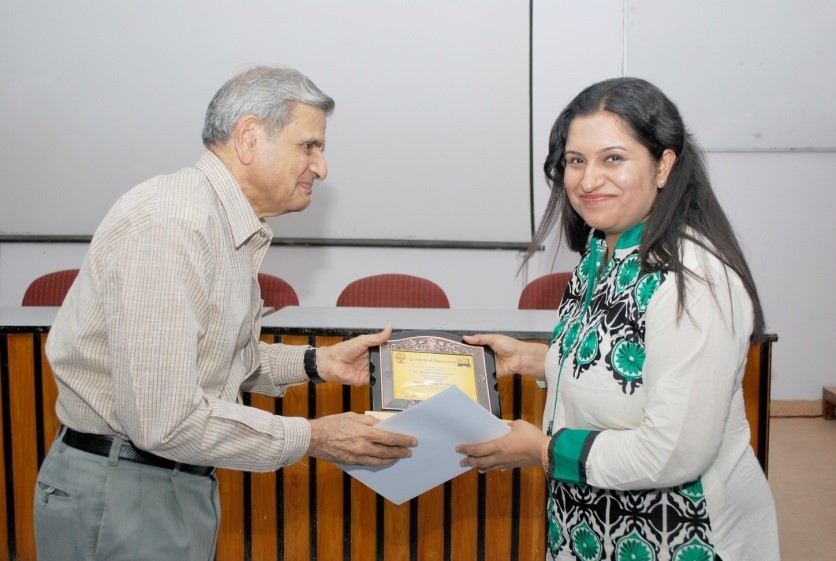 ‘Molecular pathology’ is a branch of pathology which focuses on the identification and pathogenesis of a disease through the observation and analyses of molecules within organs, tissues or bodily fluids. It has a variety of applications ranging from diagnosis in genetic disorders, haemoglobinopathies, coagulopathies, infectious diseases, inherited cancers, neoplastic haematopathology and solid cancers. Only few of us are familiar with this speciality. As clinical testing is moving to the nucleus and its genetic material, ‘molecular pathology’ is increasingly being incorporated into routine pathology practice. Dr. Monika Lamba Saini, who is, currently working at the Department of Anatomie Pathologie, Cliniques Saint Luc, Université catholique de Louvain, Brussels, Belgium delivered a guest talk at the  Academy of Medical Sciences on 29th July, 2015  among an august audience in SN Hall. She fondly remembered her times at the parent Institute.

Dr Monika described the methods in a manner that followed the historical development of the field of molecular pathology, from early applications of the Southern blot to the development of DNA amplification and sequencing methodologies, microarrays, and the new technology for high throughput sequencing. Indeed, the biggest recent strides in clinical application of molecular testing have been in the area of cancer, where the understanding of genomic aberrations in malignancies has made a remarkable impact on carcinoma diagnosis and treatment. For example, BCR-ABL monitoring and mutation testing for Chronic Myeloid Leukemia and BRAF as well as KIT testing to target kinase inhibitor therapy in malignant melanoma. As molecular pathology is evolving, newer drugs that specifically target genetic changes in cells have been developed. A good example of this is the development of trastuzumab for treating Her2/neu positive breast cancer. Molecular pathology has also revolutionized the diagnosis of infectious diseases and genetic abnormalities.

She boldly emphasized that the potential of these molecular diagnostic tests can only be realized completely by a close association between the clinicians and the pathologists.

Dr Anupama Gupta, Dr Shivkumar and Dr Anshu  from Department of Pathology, MGIMS agreed to her affirmatives and added that pathology laboratory with the capability of performing these tests in an optimal manner, and a pathologist interpreting and elucidating the results of the molecular tests and collaboration with the clinician will lead to the successful translation of scientific advancements into useful biomarkers. These advances will pave way for development of molecularly targeted drugs benefiting the patient in terms of favorable therapy, fewer side effects and therefore, better quality of life.

She was honored and touched on being felicitated by senior Professor of Medicine, Ex Dean, MGIMS, Prof. Dr O P Gupta. She also expressed deep gratitude to Dr. Nitin Gangane, Director, Professor and Head, Department of Pathology who inspired her not only to pursue Pathology from a premier institute in Europe but also motivated her to visit and share her knowledge with some of the distinguished medical schools of India where she had previously worked.