MGIMS wins accolades at the Network Conference in Johannesburg 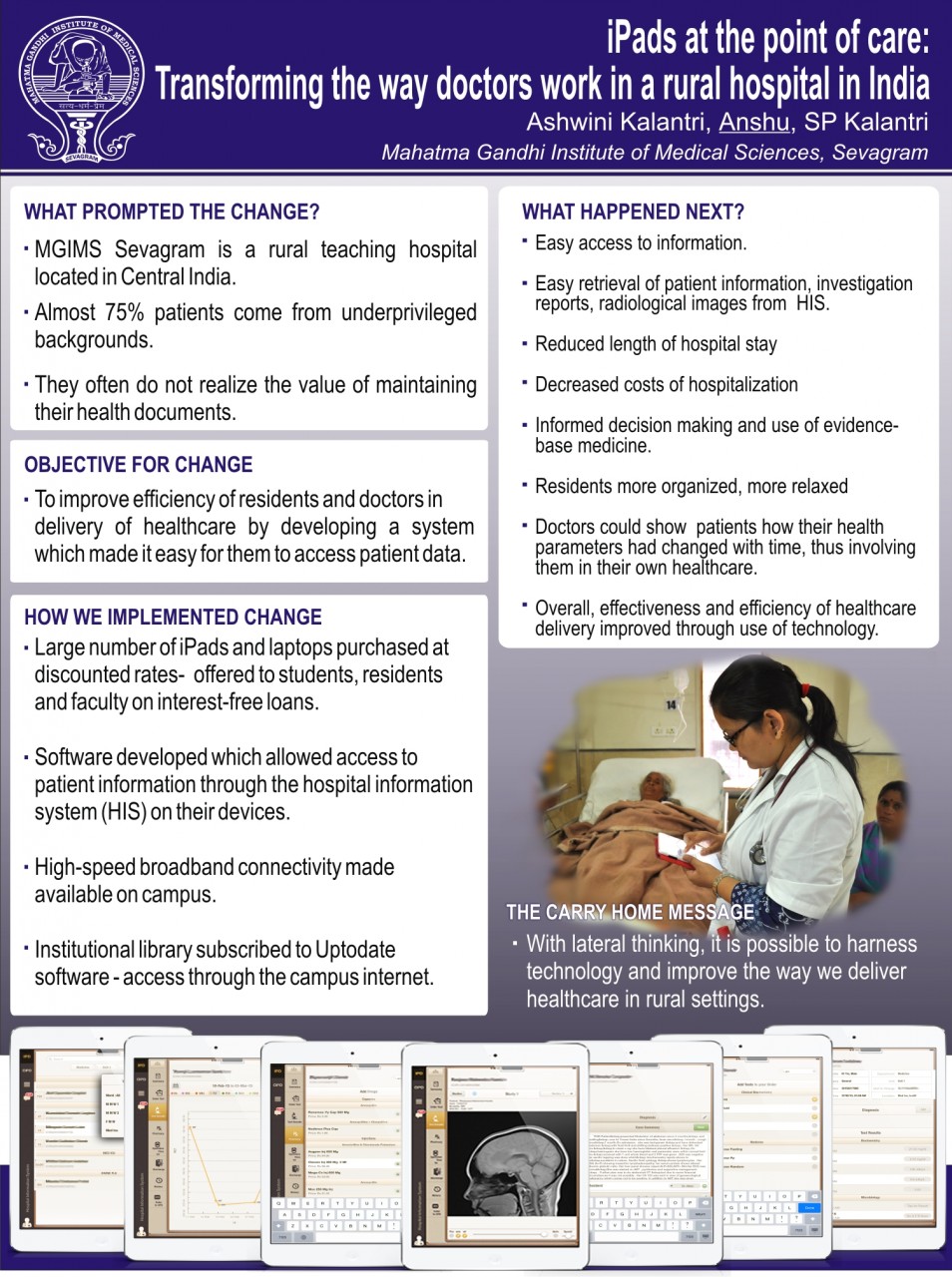 Dr Anshu, Professor in the Department of Pathology at MGIMS, was adjudged the best overall poster winner at the recently concluded annual conference of The Network towards Unity for Health (TUFH) at Johannesburg, South Africa.  The poster, co-authored by Dr Ashwini Kalantri and Dr SP Kalantri, traced the use of iPads at the point of care at MGIMS and the impact they had made on the way doctors delivered health care in rural settings.  An international panel of eleven experts chose the poster as best among around 200 posters from around the world.

The theme of the conference this year was “Education for Change”. MGIMS was represented by Dr Chhabra, Dr Subodh S Gupta, Dr Anshu and Dr Surekha Tayade. All the four faculty members used the opportunity to showcase the work being done at MGIMS at all levels and it came in for a lot of praise.  Dr Chhabra’s presented a poster was on men’s perceptions about women’s health in Melghat. She also made an oral presentation on the need to integrate health care systems and health professions education. Dr Subodh S Gupta presented a poster on the preparedness of students and faculty for e-learning at Sevagram. It elicited a lot of discussion, as faculty from resource constrained countries debated about best strategies to ensure participation in this necessary endeavor. Dr Anshu made a presentation on the Sevagram model and how it transforms students into change agents. Reactions from undergraduate students collated from focus group discussions and reflections were highlighted. The undergraduate initiatives against tobacco led by Shiv Joshi and the anti-alcohol addiction campaign by Dr Dharav Shah, Vidit Panchal and the White Coat Army came in for much appreciation. Dr Surekha Tayade displayed an attractive poster on assessment of non-specialist doctors in emergency obstetric care and made an oral presentation on maternal near miss. In addition, Dr Anshu and Dr Subodh were invited by a Colombian initiative to share the Sevagram experience and to discuss how best to design the curriculum for a new medical school that is being planned in South America. The panel of invitees for the meeting included the who’s who of community based medical education including Paul Worley and Ian Cameron.

The Secretary General of the Network also acknowledged and appreciated the work being done by Dr BS Garg for the last eight years as the Regional Representative for the South East Asia Region.

On the sidelines, the Sevagram faculty got a chance to visit Satyagraha House in Johannesburg, where Gandhiji lived with Hermann Kallenbach. They also visited prison number four on Constitutional Hill where Mahatma Gandhi was imprisoned for seven months. It was in Johannesburg  that Gandhi developed his theory of passive resistance and named it ‘Satyagraha’.