She shared with the audience Dr Sushila Nayar’s several qualities- her passion for making healthcare accessible to rural people, her strong views on growing menace of alcohol in the society, her convictions, determination and courage to fight for what she was thought was morally right and her compassion for patients struck by leprosy. From a young age, she displayed the sort of pluck that she would be known for in her public life when she fought both leprosy and the stigma which accompanied it; she considered the latter to be just as, if not more, dangerous than the disease. Marking the occasion, she encouraged the students to follow the suit of the torch bearer.

Dr JM Dave delivered the second Dr Sushila Nayar Memorial Oration on 26 February 2015. Former Director NEERI (1962-68), Additional Director General of Health, Government of India (1968-1973), Dean and Professor of Environment Management, JNU (1974-87) and Founder president of Indian Association of Air Pollution Control, the octogenarian scientist and public health crusader enjoys a five-decade old association with Kasturba Health Society- he has been a member of the Society since 1964. He shared with the audience several anecdotes from Dr Sushila Nayar’s public life that he had carefully treasured. As one who had worked with Badi Behenji in improving sanitation and quality of water supply in Kasturba Hospital- a 15- bed- hospital in early sixties, he reminded the audience of Dr Sushila Nayar’s seminal role in the Rajiv Gandhi Drinking Water Supply Mission in promoting the quality of rural water supply and safeguarding environmental sanitation. He also explained how Rajiv Gandhi Rural Water Supply Project ensured safe drinking water in 2, 58,000 villages of India. Talking beyond Dr Sushila Nayar’s contribution in making rural health a priority, he also spoke of her concern for poor, her strong belief in Gandhian philosophy and how much she valued- and fought for- the health rights of poor and underprivileged living in villages. 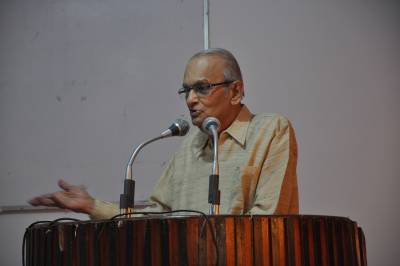 A politician, a doctor, a public health activist, a writer, an academician, a researcher, a entrepreneur, a philosopher, a social reformer, an administrator, an authoritarian—which tag describes Dr Sushila Nayar best? Dr Ved Prakash Mishra–a distinguished academician, commentator and thought leader–and known worldwide for his eloquence and oration, questioned the audience–showcasing the multifaceted persona of Dr Sushila Nayar–as he delivered the third Dr Sushila Nayar Memorial Oration on 8 March 2015. A member of Kasturba Health Society for over a decade, Dr Mishra knew Dr Sushila Nayar from his student days. “Dr Sushila Nayar was a distinguished academician, researcher, public health professional and she used her association with Mahatma Gandhi to build an institution Bapu would have been justifiably proud of, “he said. Although she was an active politician and rose to become the Union Health Minister, her feet always stood resolutely on terra firma. He described the genesis of MGIMS: “Moved by the plight of people who could not access quality healthcare, she decided to create an institution in a small village. Gifted with extraordinary courage, fearlessness and determination, she accomplished a task, that was seemingly impossible to achieve. Cynics sneered at her obsession with khadi, gave short shrift to shramdan, and failed to understand the relevance of evening prayers. However, Dr Nayar remained unfazed and stuck resolutely to her code.” He recalled her natural charm, her wit coupled with a radiant smile and and how she used her majestic voice to enthrall audiences. “Though a stickler for discipline, she was a lovable and affectionate person. Her vibrant dynamism evoked awe and exuberance. It induced a lasting respect in the minds of those who had the good fortune of sharing her company. Few doctors in medical history strove as hard as Dr Sushila Nayar did to ensure that there was not the slightest gap between their beliefs and actions. Dr. Sushila Nayar will always be remembered for her selfless and multifarious contribution in the fields of medicine, social services and education, “ Dr Mishra added.