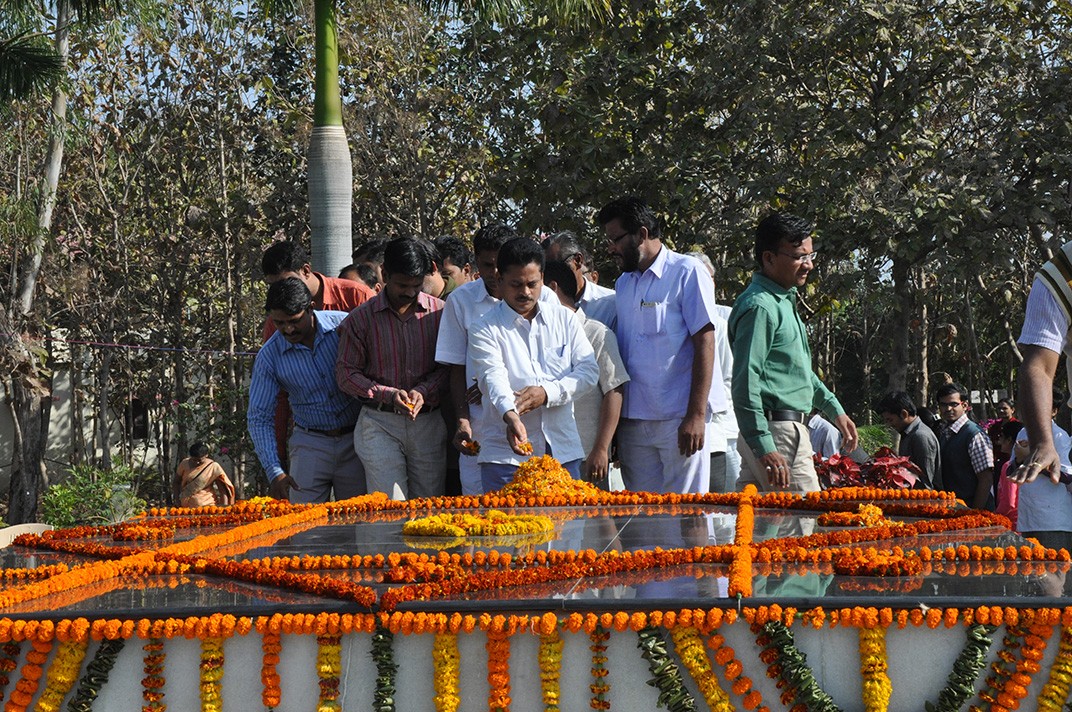 26th December 2015 marks the 101st  birth anniversary of Dr Sushila Nayar, better known as Badi Behenji - former Central Health Minister, personal physician to Gandhiji, and the founder of Mahatma Gandhi Institute of Medical Sciences, Sevagram. Students, residents, teachers, nurses, paramedics and the staff of the institute assembled together for a prayer near her Samadhi on 26th December as a remembrance to Dr Sushila Nayar. The prayer was followed by a recorded talk of Badi Behenji which left the audience with a sense of more belonging to her. Beginning December 2014, MGIMS organized a year-long celebrations in the institute to commemorate the late founder’s birth centenary.

A photo gallery depicting some of the most defining moments from the life of Dr Sushila Nayar was also launched. The exhibition showcased a collection of photographs from her personal life, her association with Mahatma Gandhi, her connection with the political world and her relationship with MGIMS.

In pursuit of Dr Sushila Nayar’s belief in high-quality medical education, compassionate healthcare and focused research wishes, a series of four workshops was organized at Dr Sushila Nayar School of Public Health from February to September 2015, to celebrate the birth centenary year of a veteran of public health.

In continuation of Dr Sushila Nayar Centenary Year Celebrations, Annual Day of MGIMS revolved round the theme of Dr Sushila Nayar. A grand cultural evening was organized on September 11, 2015 evening in the auditorium. A small act ‘Bapu ki Beti’ portraying Mahatma Gandhi and Badi Behenji Dr Sushila Nayar was performed giving a message- the seed that Bapu and Bahenji had sown has grown as a big tree giving fruits to the society.

On October 2, 2015, the Indian Association of Leprologists joined hands with MGIMS, Sevagram and Gandhi Memorial Leprosy Foundation, Wardha to organize a national CME on Advocacy in Community Health Care of People affected with Leprosy –  a key component of Gandhiji’s famous 18-point constructive programs- as a part of Dr Sushila Nayar Birth Centenary Celebrations.

In December 2015, Dr Sushila Nayar School of Public Health, MGIMS organized a series of activities to celebrate Dr Sushila Nayar Birth Centenary. Mahila Melawa (Talegaon and Anji), Kishori Melawa (Salod) were hosted to educate the young girls and females about their role in country’s development (Dr BS Garg), adolescent role in the society (Shri. Prabhakar Pusadkar) and ways to empowerment (Mr. PV Bahulekar). A geriatric meet - Vrudh Nagrik Melawa was organised by the urban Health Training Center at Matoshree Vrudhashram, Sindi (Meghe), Wardha on 17th December, 2015. Attended by about 50 elderly men and women, there were talks about the problem of diabetes in elderly (Dr Chetna Maliye), hypertension in geriatric age (Dr Ashwini Kalantri) and on mental illness in elderly (Mrs Narula).  Mr Pramod Bahulekar spoke on the need of attention towards the elderly. On 23rd December, close to 100 men and women (members of the Village Health, Nutrition, and Sanitation Committees) representing two primary health center areas of MGIMS Sevagram (Kharangana Gode and Talegaon) gathered to participate in, and share their experiences in the MGIMS auditorium. Mr. Devaji Tofa, the headman of the nondescript Mendha (Lekha) village in Maharashtra's Gadchiroli district, and one of the leaders of the villagers who had the courage to declare that they were the mien of their own destiny spoke on the occasion. On this occasion, a pictorial booklet, prepared by the Dr Sushila Nayar School of Public Health was released- the booklet tells villagers how to care for a newborn. Mr. Dhirubhai Mehta, Mr. PL Tapadiya, Dr BS Garg, Dr KR Patond, Dr SP Kalantri, Dr Subodh Gupta and Dr Abhishek Raut also spoke on the occasion.