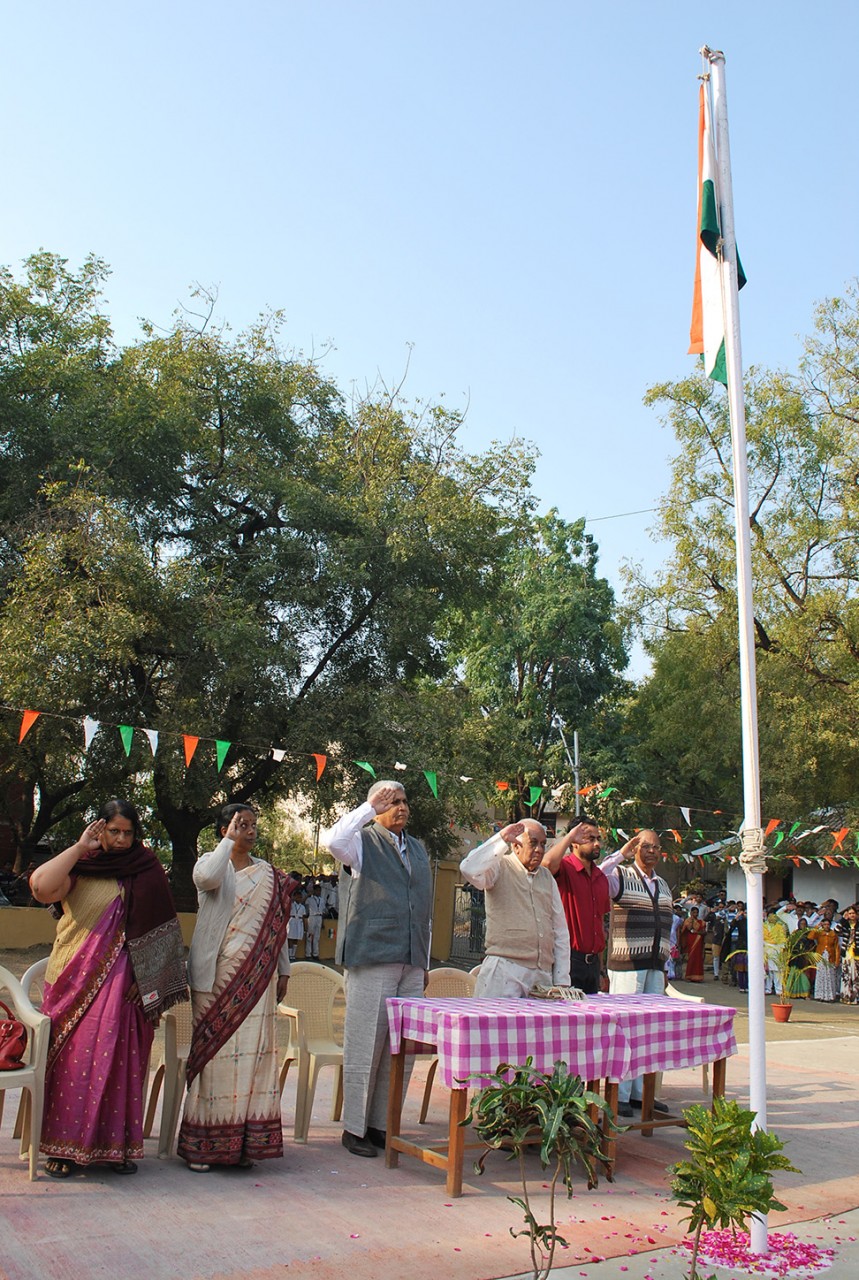 On 26 January 2016, MGIMS celebrated the 67th Republic day. The Tricolour on Tuesday fluttered proudly at the sports ground at MGIMS amid melodious strains of the national anthem as hundreds of students, nurses, paramedics, staff and faculty gathered to celebrate the country's 67th Republic Day.

Dr. Tushar Varshney—a 2010 batch MGIMS alumnus and now an intern—unfurled the Tricolour. Adjudged the best sportsperson of the Maharashtra University of Health Sciences for his prowess in basketball, Tushar earned this honour because the university has mandated that a student who excels in sports be asked to hoist the national flag on Independence Day and the Republic day. Shri Dhirubhai Mehta, President KHS; Dr BS Garg, Secretary KHS; Dr KR Patond, Dean MGIMS; Dr SP Kalantri, Medical superintendent of the Kasturba Hospital; Mrs Ancy Ramesh, Principal Nursing College and faculty, staff and students attended the program.

Vibrant parade and cultural events highlighting the culture and traditions of India were showcased. Students from the school, nursing school and medical college sang patriotic songs. A bunch of students dressed up as Gandhi, Nehru, Sardar Patel, Subhash Chandra Bose, and evoked a sense of pride amongst the audience. They also enacted a defiant act in which Rani Laxmi Bai and her fellow women defeated the English soldiers. The show received a thunderous applause.

Mr Dhirubhai Mehta chose to speak on intolerance—a theme that has evoked sharp debates among writers, actors and press. Quoting the provisions of the forty-second amendment of the constitution, he argued that India has always been a tolerant country and over centuries has treated everyone equal- regardless of caste, creed or religion.  “We are an unexplainable, indefinable and incomprehensible nation. We can’t be understood on the semantics of tolerance and intolerance,” he said. Taking a dim view of the negative vibes created by the media, he said that we ought to ensure that dark clouds of negativity do not dim the spirit of communal harmony of the country.  The program ended with the national anthem and a grand salute to the Tiranga.

After the Republic day celebration, Shri Dhirubhai Mehta inaugurated the Boys’ hostel mess—and the dining hall— that were recently face-lifted and remodelled. “Hungry stomachs always look forward to savoring gourmet meals. But these aren't the only ingredient of an enjoyable dining experience. The setting, the surroundings, and the general ambience are as important. Dining in the mess gives students the chance to relax, unwind and develop bonds while eating a meal. Now that the old void has been converted into a lively and interactive space, students can watch the 2016 ICC World Twenty20 as they enjoy their lunches and dinners,” said Dr Shiv Kumar, professor of Pathology and the warden of the boys’ hostel. The new kitchen and the dining hall are a dramatic update from the old; they have a distinct calm, spacious, uncluttered, relaxed, and refreshing look. Students generously thanked Dhirubhai for re-designing the dining area. “This would surely whet our appetite,” a gastronome quipped.

Dhirubhai also went around and wondered if the gymnasium in the girl’s hostel could acquire new muscles and if the dining hall and the mess in the girls’ hostel could also be spruced up.  ”The mess in the girls’ hostel should look as stylish and the dining area should look as suave as their counterparts on the other side of the fence,” he hoped. He was pleasantly surprised to see students taking up cycling in the campus.

A badminton court, recently built between the boys’ and girls’ hostels, was also inaugurated. “These days MGIMS badminton circuit is teeming with a crop of talented youngsters who aspire to make it big at the state level. We hope to see clones of Prakash Padukone, Pullela Gopichand, PV Sandhu and Saina Nehwal emerging from these courts,” hoped Dr Ashok Mehendale, himself an ace aficionado in his heydays. Shri Dhirubhai Mehta, Dr. BS Garg and Dr. KR Patond responded to the request from the students and tried their hands at the rackets and the shuttles—using a mix of forehand, backhand and underarm shots.

A tree plantation programme—an initiative to green the campus—followed. Students planted close to 100 trees near the hostels; the management also planted trees on either side of the badminton court.