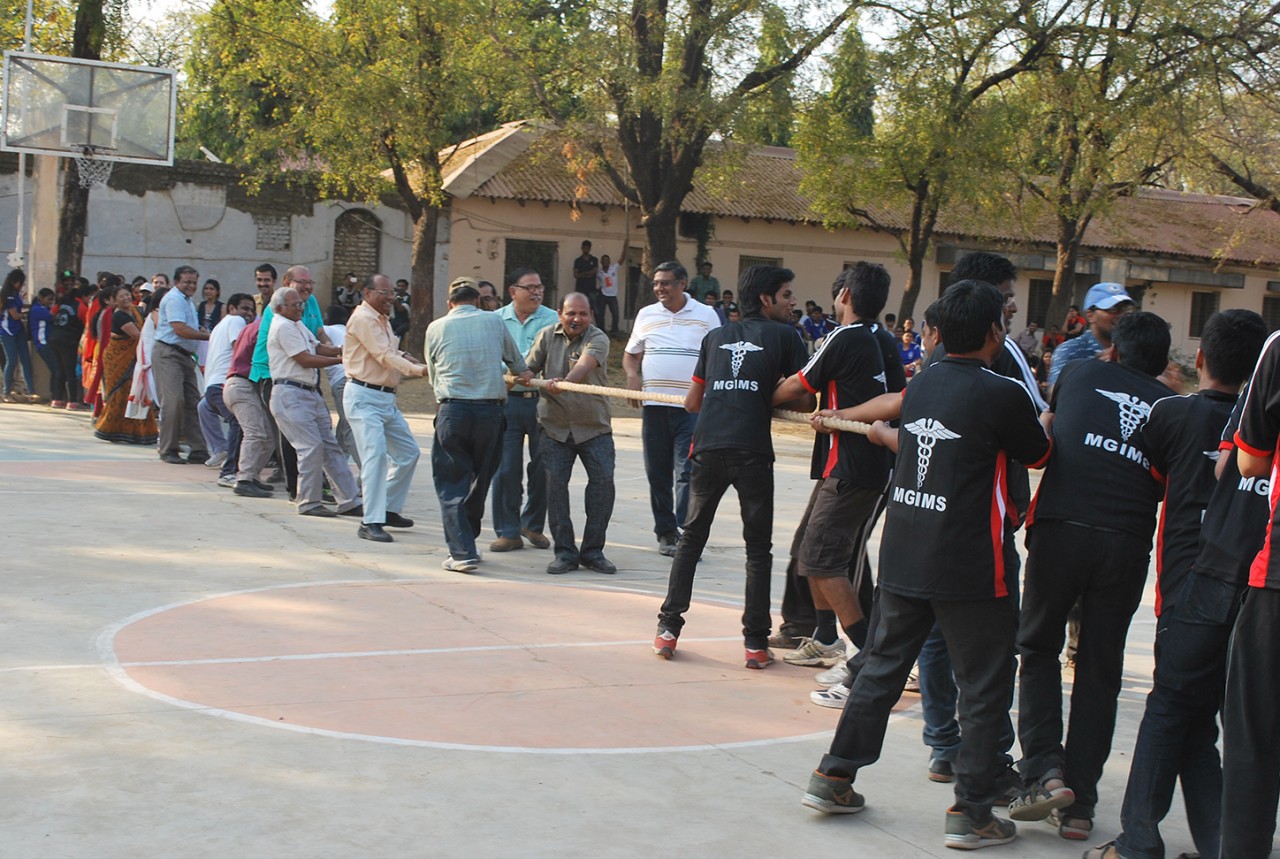 MGIMS celebrated its annual sports meet on 18th February 2016 at the sports ground at MGIMS campus. Both students and staff seemed to have come with dream in their eyes and fire in their bellies. The sports ground witnessed the cheers and cries of the participants and their supporters.

The event formally commenced when Dr KR Patond, Dean of the institute lighted the lamp and gave a head start to the events of the day. His good wishes raised the spirits of everyone and added charm to the occasion. Dr Manish Jain, Incharge Games and Sports and Dr Satish Kumar, Incharge Student Council welcomed the cheerful crowd. Mr Girish Bhoware, Director, Physical Education administered the oath to all the participants, thus instilling a feeling of camaraderie among all.

The sports day events were divided into two groups – one for the students and the other for the teachers. The inter-batch tournaments that were going around in the campus for over a fortnight had rendered the finalists of Volley ball, Throw Ball and Basket Ball to play their finals at the main event. The sporting events began with 100 mt sprint, relay race, sack race, three legged race and spoon race where participants exhibited tremendous amount of zeal and courage to fight to the finish amid the cheers from their friends and teachers. This was followed by other athletic events like shot-put, discuss throw, slow cycling and slow biking for students who showed equally high levels of adrenalin flowing in them.

Amidst the cheerful crowd, teachers swapped their stethoscopes with sports gears and shoes and were seen trying their stints at sports events like 100 mt sprint, fast walk, shot put, blind matka breaking, slow biking, ghagari relay, lemon and spoon race, tug of war and musical chair. The live commentary of the sport could rightly depict the tension that prevailed on the play-ground.

After the completion of the athletic events, proud winners were honored by the dignitaries with medals, trophies and certificates. The batch of 2012 was adjudged as the overall champion of the year. Mr Deepak Katpade (2012) and Ms Radhika Chaouhan (2012) were declared respectievly the best sportsman and sportswoman of the year. Mr Pranav Nagpure (2015) was given the emerging player of the year award. The sports stars with shining bright faces flaunted their trophies and gained appreciation and thunderous applaud from everyone.

Dr Manish Jain expressed his gratitude for everyone in making the event successful. He also thanked Dr KR Patond, Dean MGIMS, Dr OP Gupta, and Dr KY Vilhekar for their time and encouragement. Mr Harshal Tayade, General Secretary, Mr Karansingh, Sports Secretary and Ms Shivani Kshirsagar, Jt Sports Secretary were also acknowledged for all the efforts that they had put in. The program ended with the national anthem.