Information under MSR Clause B.1.11 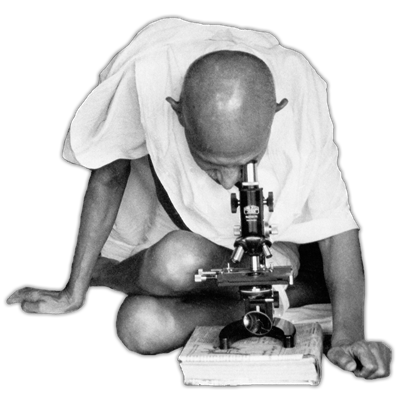 The MGIMS logo has Mahatma Gandhi peering intently into a mono-ocular microscope. Beneath the picture are the words "Satya, Dharma, Prem".  Translated, they mean truth, duty and love. The Mahatma lived by these ideals, and the Institute aims to sustain them in the practice of Medicine. Below that is the Caduceus, as a symbol of medical science.

On the floor, seated at the same level as the microscope, the Mahatma appears as much at ease with the instrument as an experienced microbiologist. The photographer’s identity is unknown. However, the picture is apt on the logo of a medical institute started with the Mahatma’s blessings. It conveys the scientific temper of the father of the nation, who had guided our country through the throes of birth. Keen curiosity about science, and an ethical approach towards whatever he took up, characterized him.

The picture was first put up in front of the small laboratory in the original Kasturba Hospital, located in the Birla building. There have been many conjectures about what Gandhiji was looking at in the microscope. Since his interest in leprosy was well known, it was assumed that he was looking at Mycobacterium leprae. However, Dr KV Desikan, an octogenarian leprologist of international standing, differs. He says that Shri. Prabhakarji, a close associate of Mahatma Gandhi and Dr.Sushila Nayar, had told him that Gandhiji was looking at malarial parasites. Prabhakarji had also told him that Gandhiji himself had malaria and had been treated by Dr.B.C.Roy. What he did not know, however, was whether, in the picture, Gandhiji was examining a smear of his own blood. Dr.Desikan feels that since Prabhakarji had lived and worked with the doctors during the very inception of the institute, his words would be authentic.

Be that as it may, Gandhiji’s scientific curiosity remains immortalized in this picture. It was this bent of the Mahatma that inspired Dr.Sushila Nayar to set up a medical institute, based on Gandhian ethos. The Mahatma Gandhi Institute of Medical Sciences continues to serve rural communities, while maintaining exemplary standards of scientific research. The Mahatma would have approved.