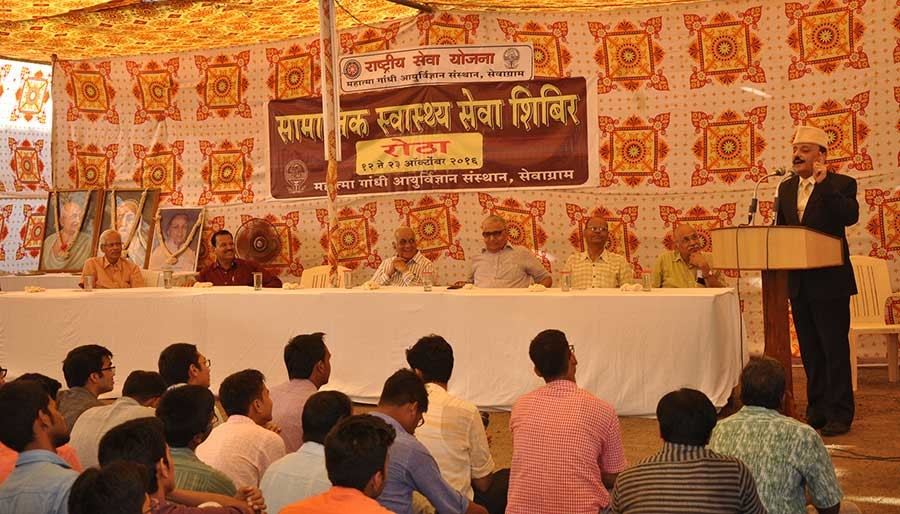 Barely a fortnight after the first MBBS students of MGIMS had experienced the orientation camp at the Gandhi Ashram in Sevagram, they had another tryst with village life: a social service camp at Rotha—a village 16 km west of Sevagram. The students found themselves packing their backpacks once again to set off for the camp that started on 12th October 2016.

“Fifty-four girls and 46 boys from places as diverse as Kerala, Rajasthan, Gujarat and Nepal have flocked together to comprise the batch of 2016 at MGIMS”, said Dr. Ashok Mehendale, Head of Department of Community Medicine, as he introduced the theme of the camp to the stakeholders of the social service camp. In his introductory speech, he also told that over the 12 days, the students shall be collecting health-related data from 341 families and 1389 people living in Rotha village in several structured sessions— numbers that would help them know what ails villagers and why they fall sick.

In his welcome address, Dr. KR Patond, Dean MGIMS gave the students an overview of the camp and spoke of its importance in their grooming. “Now that you have adopted this village, and as you would visit this village every month during your graduate days, you would acquire a rich insight into the social and medical problem of the villagers.” “The village adoption scheme is an innovation of community based medical education and a unique feature of MGIMS”, he added.

Dr. Vijay Chaudhary,a physician who also doubles up as the Sarpanch of the village told how Kasturba Hospital is helping people living in resource limited settings get quality healthcare at an affordable price. “These students are our guests and we would ensure that they enjoy a memorable stay in our village,” he assured.

Dr. Ved Prakash Mishra, Hon’ble Chancellor, Krishna Institute of Medical Sciences Deemed University, Maharashtra, and a member of the Kasturba Health Society, Sevagram was the chief guest of the inaugural function. “We need to work for the weakest of the weak, and in the remotest of the remote location to bring back smiles on the faces of the sick community. To be able to acquire the healing touch that the society expects from the doctors, the doctors ought to strive hard to develop Five C’s—Confidence, Character, Competence, Concern and Compassion”, he said. “These are the qualities that would help you develop into a socially conscious doctor,” he  added.

Shri Dhirubhai Mehta, President Kasturba Health Society, Sevagram spoke that a modern medical student ought not to get distorted by vision colored by caste, creed and communal views and should make the villages a healthy place to live in and thrive.

Mr. PV Bahulekar compered the function and Dr. Abhay Ambilkar proposed the vote of thanks. Several faculty members also attended the function. The first impressions are often the most lasting, a fact testified by the students of the 46 past batches of MGIMS who had also spent a fortnight in villages around Sevagram. The first session succeeded in generating a sense of belonging to the villagers in the hearts of medical students.