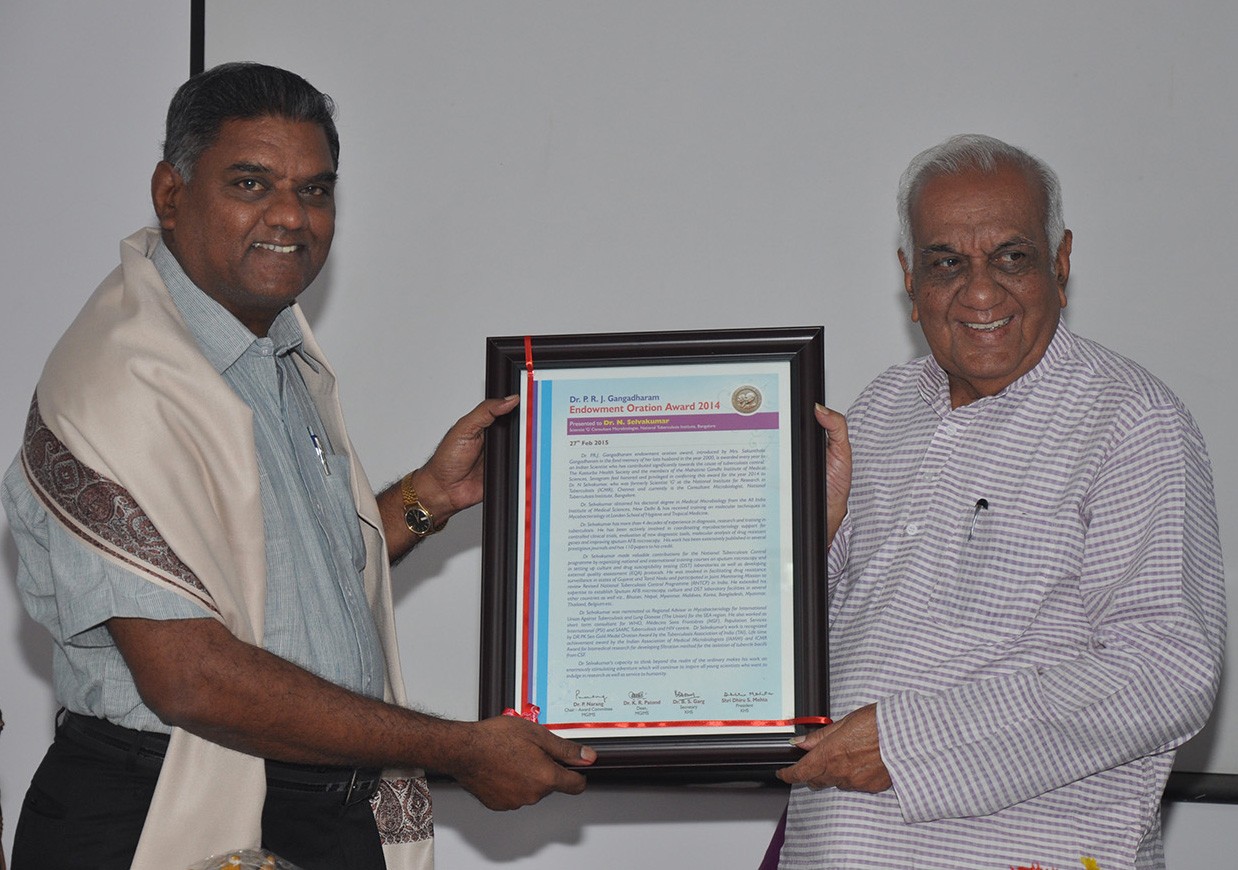 Dr Selvakumar, a Consultant Microbiologist at National Tuberculosis Institute, Bangalore has served as scientist ‘G’ and has led the supranational reference laboratory for TB, National Institute for Research on Tuberculosis, Chennai. His laboratory has helped the Government of India formulate and amend many policies related to TB control in India, particularly under programme conditions. His extensive work on sputum smear microscopy has won him many honours and awards. As a consultant to the WHO and the Union he helped establish laboratories in many countries in the Southeast Asia.

The PRJ Gangadharam Oration Award was started at MGIMS by Mrs Shakuntala Gangadharam in 2000 in the fond memory of her husband, Dr Pattisapu Rama Jogi Gangadharam, who passed away in 1999. Kasturba Health Society gives this award - a citation, a certificate of merit and a cheque for Rs. 25000 - to an Indian Scientist who contributes significantly towards the control of tuberculosis, a disease that hits 9 million people each year and kills close to 1.5 million people. Since long, researchers at MGIMS have focused on tuberculosis, and their hospital as well as field-based studies have generated useful data on TB prevention, diagnosis, prognosis and therapy.

In his oration, Dr Selvakumar brought out the fact that although TB diagnosis has undergone a sea change in the past decade, sputum smear microscopy still remains the key investigation for detecting pulmonary tuberculosis under programme conditions and will continue to remain, till we are able to find a point of care test for the disease. “One of the important components of my research has been to improve the quality of stained smears and make the staining procedure more acceptable to the technicians, “he said. He explained how subtle modifications in the techniques to process and stain a sputum smear have resulted in substantial improvement in the accuracy of smear microscopy. He showed that the examination of two sputum smears (one spot and an early morning) is as effective as examination of three smears, a finding that helped the Government of India modify its recommendations under the RNTCP much to the benefit of both the patient and the laboratory.

Shri Dhirubhai Mehta, President KHS presented the award and felicitated Dr Selvakumar for his remarkable contribution to TB research. In his presidential speech he highlighted the present TB scenario in the country and emphasized on the need for having tests that would help in early detection and prompt treatment of TB patients. The dais was shared by Dr Mrs P Narang, conveners of the award, Dr BS Garg, Secretary KHS; Dr Patond, Dean MGIMS and Dr S P Kalantri, Medical Superintendent, Kasturba Hospital.