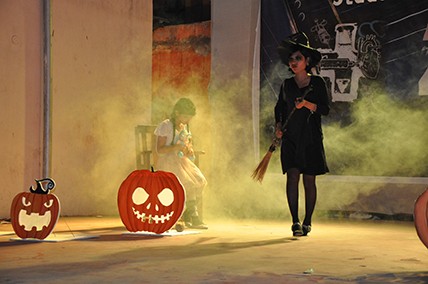 The social gathering that the medical students organize and celebrate each year has become as much an integral part of MGIMS as the sky-high cut offs or the compulsory attendance MGIMS is associated with. Ever since the bricks of the cultural society were laid in 1969, the society has constantly been striving to raise the bar- with performances just keep getting better. Every year MGIMS students unleash their creativity to amuse, entertain and enthrall the audience by a breathtaking display of their raw talent.

This year was no exception. The students’ council organized a series of cultural events christened ‘ZION-Every Soul Awakened' on February 25 and 26, 2015. The zeal and enthusiasm of the students was palpable all through the events and culminated into successful and entertaining programs that were widely appreciated and applauded. Because this year was the birth centenary year of MGIMS founder director, Dr Sushila Nayar, the students chose women empowerment as one of the key themes for the cultural events - an issue dear to Dr Sushila Nayar’s heart.

The day one of the cultural events began with the traditional lighting of the lamp by the president, secretary, dean and medical superintendent of the institute.  The audience comprised of faculty, students and other healthcare workers. A gala of mesmerizing dances, fashion shows, musical events followed - each event portraying the creativity of the students. Nirbhaya- Humme Maaf Karo Damini turned out to be a heart touching act and generated a standing ovation from the audience. Medical students from all batches participated in this spectacular act, thus making it even more special. The silent mime on Save Girl Child earned wide appreciation from the audience. Indeed, those who were asking what mime is became speechless after the performance.

The day one of ZION left the audience yearning for more; the day two was no less exciting. The medical students remembered- and pleasantly surprised the dean by celebrating his birthday. Next, the college band presented Rhythm Extreme which evoked a spontaneous applause from the audience. The highlight of the evening was human beatboxing- the use of vocal organs to imitate percussion instruments. It was just six vocal percussionists and the mic – with no musical instrument, no excuses and loop buttons to hide behind. The performers found their own voice, developed their own style, experimented with their vocal techniques, emulated bass lines, imitated actual drum noises and invented new sounds that nobody had ever heard. The performance aptly named A Capella- A Homage to Dr Sushila Nayar (A Capella - Italian, music without instrumental accompaniment) drew a thunderous response from the connoisseurs. Dr Aditya Tarnekar, the professor of anatomy and teacher-in-charge of the students' council also surprised everyone by showcasing his vocal creativity. ZION also featured a Spanish dance which was based on the philosophy  of positive thinking, a concept that was novel to the audience.

Zion transformed the traditional form of music into yet another piece of euphonious creativity named 'Sargam'. Teachers- forgetting their age, seniority and hierarchy- joined the students and the melodious tunes that filled the open auditorium struck just the right chord leaving the audience asking for more.

‘Directed efforts always yield fruits' - so goes an aphorism. And if the mind boggling response to the collective efforts of the medical students was anything to go by, the students’ council seemed to have worked hard to achieve the objective. ZION 2014-15 was aimed at awakening every soul, a mission that that the students so succintly  accomplished. More importantly, it also succeeded in raising the bar for the cultural events at MGIMS.