Dr. Mohan D Gupte (an expert in the field of Epidemiology and Public Health) and Dr. Atul Shah (a plastic surgeon and a pioneer in Leprosy prevention and rehabilitation) were conferred the award for their outstanding contribution in the field of leprosy. The award consists of a medallion, a citation and a cash prize of Rs 200, 000 to each awardee.

Shri Dhirubhai Mehta, Chairman, Gandhi Memorial Leprosy Foundation Wardha welcomed the chief guest and the awardees. He said that leprosy was dear to Mahatma Gandhi as well as to Dr. Sushila Nayar and narrated the efforts by the GMLF for prevention and rehabilitation of people with leprosy. Mahatma Gandhi did not just preach about the need for people to care for those afflicted by this disease, but was himself personally involved in the work, he said.

Mr. Jayant Banthia and Dr. B.S.Garg read the citations for the awards. The awardees, in their acceptance speeches, thanked the organization and narrated what made them walk the path less traveled by, explained how they designed innovative interventions to reduce the burden of leprosy and told the inspiring four-decade-long story of their struggle to reduce the disability and deformity leprosy is associated with.

Speaking on the occasion, Shri Venkaiah Naidu extended his congratulations to the recipients of the International Gandhi Award for Leprosy. He applauded their remarkable efforts to reduce the national burden of leprosy through treatment, training, and research. “The awardees exemplify the life and works of doctor-researchers,” he said. “We should learn from them how selfless work can bring incessant joy and the happiness in the lives of the people who suffer from what was once considered a dreadful disease,” he added. Shri Naidu inspired his listeners to follow the Gandhian advice of going back to our roots – preserving our language, culture, and heritage – accepting swadeshi and swavalamban – and wearing khadi. “Although the modern medicine has brought down the prevalence of leprosy to 1: 10,000, countrywide, some states continue to have a high prevalence of leprosy and our public health professionals must strive hard to bring down these numbers”, he said. He urged all the stakeholders to make a joint effort for the eradication of the disease. 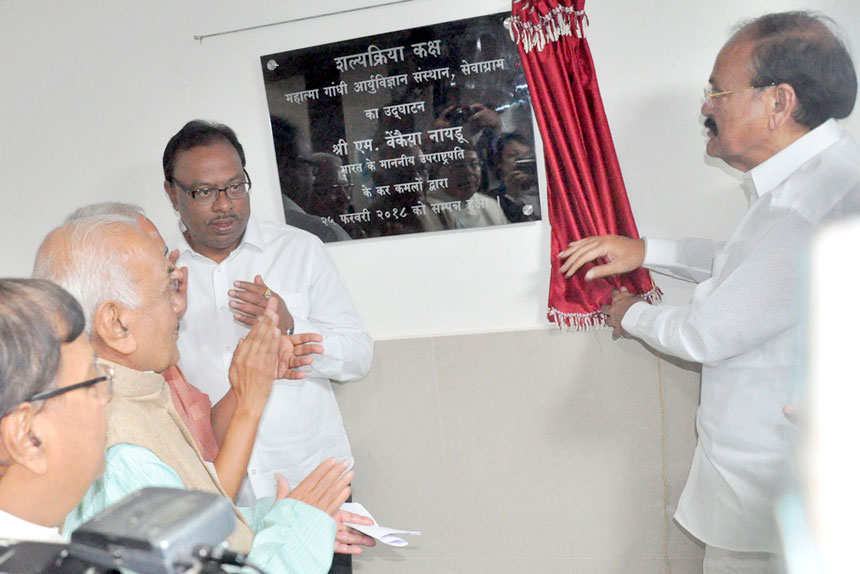 Shri Naidu also inaugurated the new state-of-art Operating Theatre complex of the hospital. Dr. SP Kalantri, Director-Professor of Medicine, the Medical Superintendent of the hospital and Chargé d’affaires of the project explained to the Vice President about the healthcare facilities available in the hospital.  In his PowerPoint presentation, he displayed the hospital data: 900,000 patients visiting the outpatient departments of the hospital, close to 50,000 patient admissions, and a little over 10,000 major operations— Neurosurgery and Cardiac Surgery recent additions— performed in the hospital, each year. He showcased several exclusive features of the hospital: health assurance schemes; electronic hospital information system; low-cost drug initiative; mother and childcare and community-oriented medical education, research and healthcare.  Hon’ble Vice- President felt happy to note how Kasturba hospital is making rapid progress to meet the growing health challenges of the poor and marginalized people. “An effective health-care system is an indicator of development in any society,” he said.

Shri PL Tapdiya proposed the vote of thanks. The program was compered by Dr. Anupama Gupta (Professor of Pathology). The program was attended by staff of the Gandhi Peace Foundation, bureaucrats, doctors, medical students, nurses, and the staff of MGIMS.