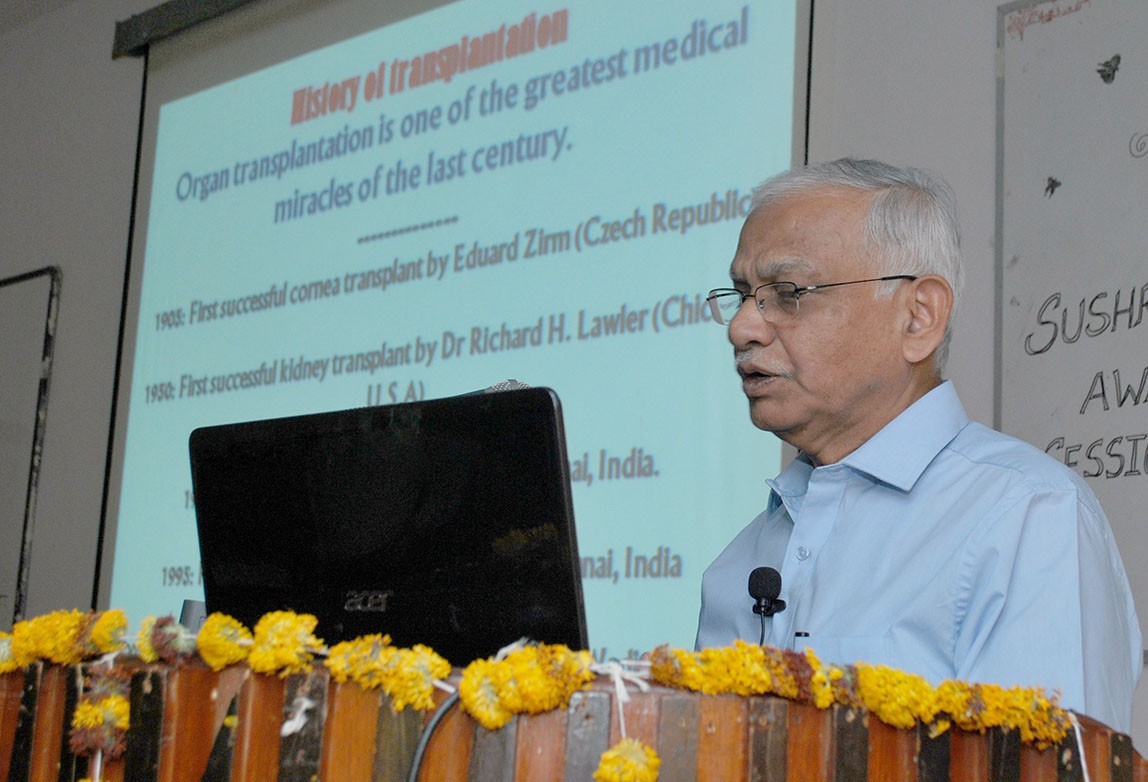 “More than 500,000 people die in India every year from organ failure without any hopes of receiving a organ transplant: end-stage liver disease kills 200,000 people; severe heart failure takes away 50,000 people and 150,000 people await a kidney transplant but only 5,000 get one. Close to 1,000,000 people suffer from corneal blindness and await transplant,” said Dr Ravi Wankhede, representing the MOHAN (Multi Organ Harvesting Aid Network) Foundation, a non-government, not for profit organisation established in 1997 in Chennai and now spread across the country.

Dr Wankhede— a crusader of the cause of organ donation in India, and a pathologist who has donated his kidney to his friend— came to Sevagram on 25th March 2015 to volunteer his expertise on organ donation and deceased organ transplantation. The lecture was jointly organized by the the department of Anatomy and the Academy of Medical Sciences. The MGIMS faculty and Wardha-based public activists representing two non-government organizations attended his talk.

Dr Wankhede used PowerPoint to answer everything that the audience wanted to know about organ and tissue donation. He addressed such voiced and unvoiced queries from the audience as: “Who can donate? Which organs and tissues can be donated? Is there an age limit for the donations? How does organ donation help patients with failed kidneys and liver?”

Citing real life examples, he explained how brain dead individuals can donate as many 32 organs—two kidneys, heart, heart valves, liver, pancreas, lungs, bones, tendons, skin and a pair of eyes. He also shared the success story of skin banking in Nagpur. “Do not burn or bury your organs; donate them,” he appealed. “The donors continue to live among recipients who get a new lease of life by their altruism.”

“Although the first kidney transplant in India was performed in 1971 at Chennai, the number of patients requiring transplant far outnumbers the available organs, leading to a competition that tests the principles of transparency and distributive justice. Organ donation depends on consent from family members—often shaped by cultural, religious and societal factors. These factors, and lack of public awareness often prevents families from giving consent,” said Dr Wankhede.

"Also, there is a lot of misinformation that people have, many misconceptions and myths surrounding organ donation,"Dr Wankhede said. He explained the Transplantation of Human Organs Act and also described the concept of brain death. The Act, he said,  requires 4 doctors to diagnose brain death on 2 occasions at an interval of at least 6 hours. The audience was informed that recognizing brain death has several benefits. Instead of ventilating brain dead ‘heart-beating’ cadavers our limited intensive care facilities could be diverted to saving patients who are still alive, relatives could be spared extended periods of unnecessary anguish and false hope while waiting beside what is essentially a corpse and, finally, organs such as the liver and heart which required heart-beating donors could be harvested for transplantation.

He spoke at length on ground realities in India: only well-equipped intensive care units in large corporate hospitals in big cities can handle potential organ donors. Such ICUs are few, he agreed. To add to the growing woes of patients awaiting organ transplant, none of the teaching hospitals in Maharashtra offers this service. Also, the public hospitals lack trained grief counsellor-cum-transplant coordinators who explain to the families what brain death stands for, how it is irreversible, how the law recognises it, and why they should donate the organs.

“We need to learn from Tamil Nadu, where individuals, intensivists, non-government organizations, bureaucrats, administrators and public activists joined hands to promote and sustain organ donations. The organ transplant network in Tamil Nadu is ten times more effective than other states in India, and Maharashtra can do well to emulate Tamil Nadu,”said Dr Wankhede.

Organ donations have recently become more frequent at Nagpur, said Dr Wankhede. He narrated the story of Zoya Rana, a young girl who bled to death after being hit by a car in Nagpur a day before. She was admitted to a private facility in Nagpur where doctors tried all they could to save her, but couldn’t. A team of four independent doctors declared her brain dead. Explaining brain death to the family was a challenging task that required counseling skills, compassion and empathy. Dr Wankhede and his team helped the family understand the greater good of organ donation. Overcome with grief and deep sorrow, her parents mustered enough courage and donated her cornea and kidneys.

Dr Wankhede suggested that MGIMS should immediately apply for establishment of Non Transplant Organ Retrieval Centre (NTOC). Once MGIMS gets a consenting nod from the Government, plastic surgeons from Nagpur can join hands with MGIMS to retrieve and harvest skin from the brain dead patients—an act that can save lives of burn victims.

Death can be life giving— the audience learnt. MGIMS doctors have already plans afoot to create awareness of organ donation and to upgrade the hospital for organ donations and harvesting.