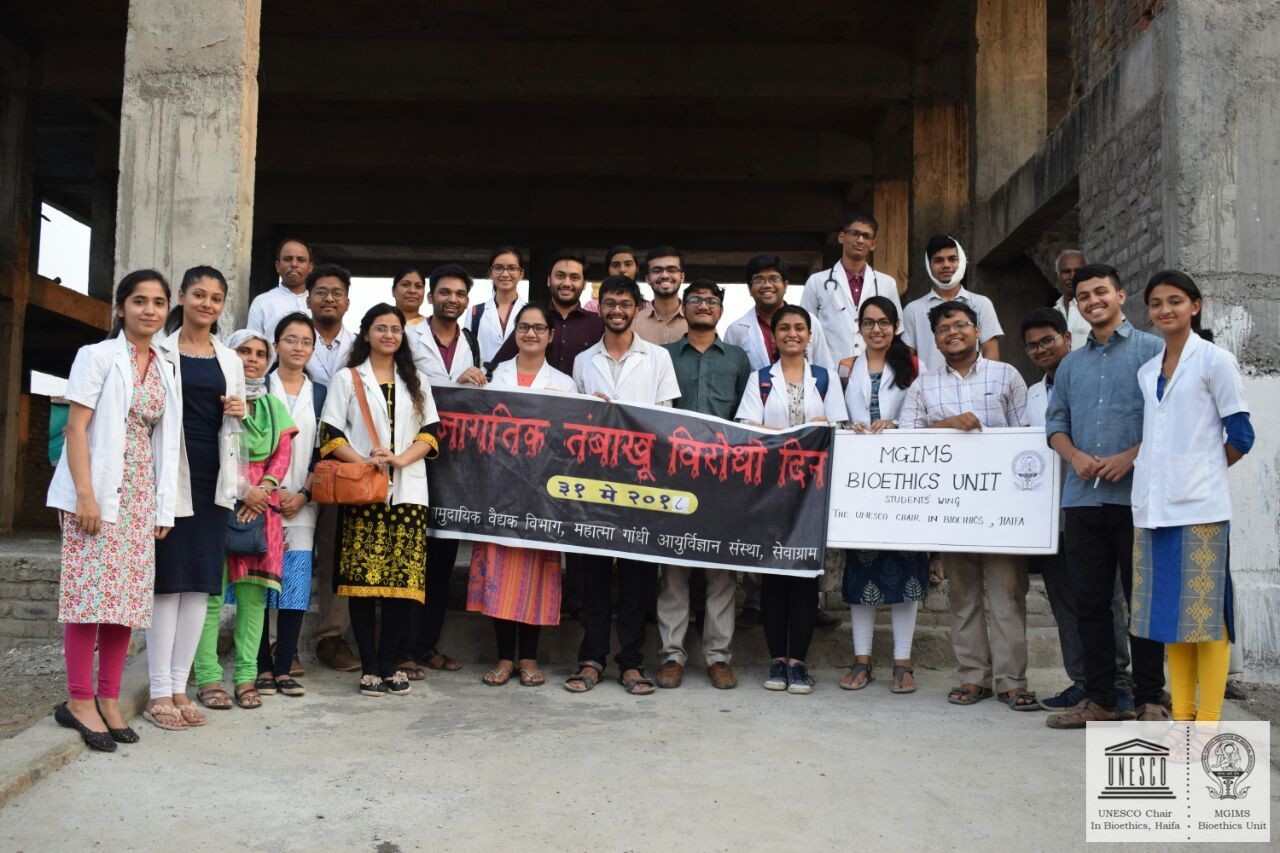 On 26th May 2018, the Students' Wing of Bioethics Unit of Mahatma Gandhi Institute of Medical Sciences, Sevagram hosted a five-part-anti-tobacco campaign in Rotha, a village located 16 km away from Sevagram.

First, the students sang a local song on de-addiction to catch the attention of the villagers.  It added to the ambience of the street play. Soon, a number of people, mostly the youngsters, flocked together to form an audience for the campaign.

Second, a motivational talk suggesting the behavioral and physical changes in tobacco eaters was delivered. The villagers were also warned how tobacco eating affects their socio-economic status. One of the students shared the story of an oral cancer patient and it filled every heart with fear against this deadly evil. An elderly person stepped forward to join the students to fight against this evil in his village.

Third, the students explained the villagers how smoking harms. A role play depicting the lives of three youth who succumbed themselves to the deadly clutches of tobacco addiction was performed.

Fourth, the students demonstrated the isolation of nicotine from the cigarette smoke using a practical and functional model of human lungs. The black coloured nicotine deposited on the tissue paper stigmatized the young spectators.

Finally, a rally against tobacco addiction was held. Students and even the locals of the village joined together and led the candle march. Slogans like “vyasan chhoda, ghar joda” filled the village atmosphere with disgust against this addiction. Despite the bad weather conditions, the fight against the evil stood still.

The residents and social workers from the department of Community Medicine supported the campaign. The students were extremely elated and expressed their gratitude to Dr Samir Yelwatkar (Chair, MGIMS Bioethics Unit) and Mr Belurkar for their cooperation in making this campaign a big success. Dr. Shiv Joshi (National President, Students' Wing, Indian Programme of International network of UNESCO Chair in Bioethics, Haifa) also guided the campaign.
Graduation Ceremony for 2014 Batch held