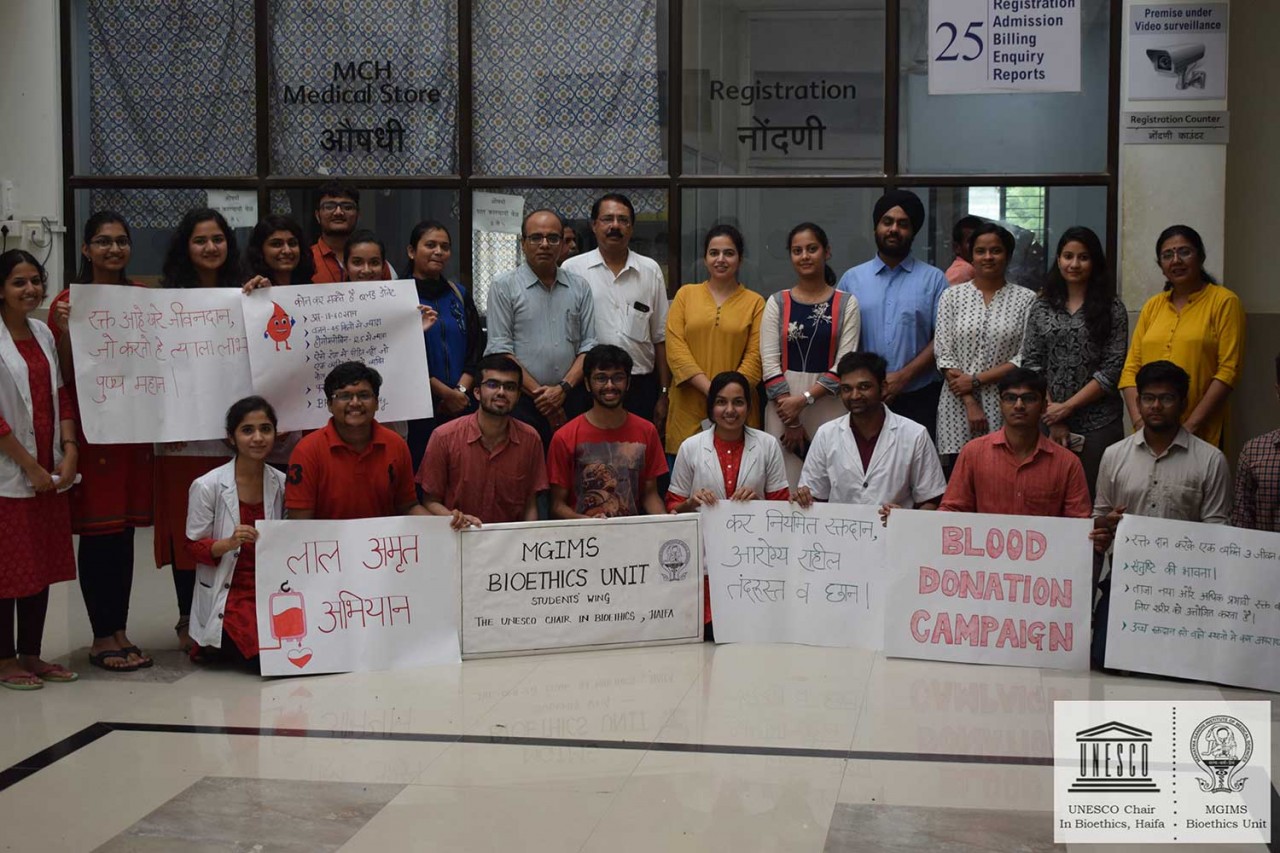 Lal Amrut Abhiyan – a blood donation awareness drive was recently initiated in the hospital premises by the students of Bioethics wing of Mahatma Gandhi Institute of Medical Sciences. Pictorial demonstrations, awareness talks, role plays and real life discussions made the contents of this drive. The aim of the campaign is to educate people about the importance of blood donation, separate truths from myths associated with it and drive more and more people to volunteer for it.

On 14th July 2018, the first event of the blood donation awareness drive was held in Mother and Child wing of the hospital. Hundreds of men, women and children along with faculty, staff and students were gathered in front of the OPD premises. The team of students – dressed in blood red colored apparel- caught the attention of its audience.

A small demonstration was given to the audience to show how the amount of blood withdrawn (300 ml) during blood donation was insignificant in comparison to the total amount of blood (5000 ml) present in the body. A role play was performed to depict the significance of regular blood donations. It emphasized upon the importance of blood donation and thereby saving someone’s life in case of emergencies. The skit concluded with the message – ‘The blood donor of today may be the recipient of tomorrow’.

An awareness talk was further delivered to elaborate on the eligibility criteria and contraindications of blood donations. The students tackled the superstitions associated with blood donation, reasoned them and answered all the questions on why should one donate blood! A real life scenario of Beta Thalassemia – a disorder that requires regular blood transfusions – motivated the audience to step forward and donate.

Looking at the helpless patients waiting in anticipation of a blood bag everyday Dr VB Shivkumar, Professor of Pathology and In-Charge of Blood Bank said estimated, “ Only 10% of the population in India donates blood annually while; one in seven people entering the hospital needs blood”. “One pint of blood can save three lives”, told Dr Shivkumar

Two gentlemen from the audience shared their experience with the rest of the crowd. They vouched that their blood donation did not cause any detrimental effect to their body. The audience were guided regarding the procedure of blood donation and contact details of the team was provided to them after the event.

Dr N Gangane, Dean MGIMS encouraged the noble initiative and said, “Our students have constantly been working to empower community with knowledge and opportunity. Let us hope that people start donating blood not just in need but to save others’ lives as well.”

Dr Shiv Joshi, National President, Students' Wing, Indian Programme of International network of UNESCO Chair in Bioethics, Haifa said, “Lal Amrut Abhiyan shall be an ongoing drive where we shall conduct a string of campaigns to sensitize patients and relatives in different wards and OPDs towards the importance of blood donation. We also seek to motivate people to come for voluntary blood donations.”

Dr.Poonam Verma, Head of Obstetrics and Gynecology and Dr Leena Chimurkar, Assistant Professor of Pharmacology were also present during the event. Professor Amnon Carmi, Head of UNESCO Chair in Bioethics, Haifa also reciprocated on this event with positive comments.