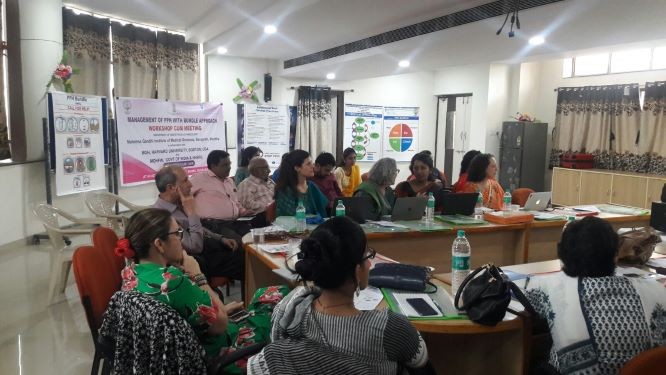 MGIMS has taken an active role in reducing maternal mortality due to excessive bleeding during childbirth or postpartum hemorrhage. MGIMS collaborated with Massachusetts General Hospital and Harvard University and introduced the award-winning innovation ESM-UBT in a project to curb maternal deaths. (ESM-UBT) - ‘Every Second Matters for Mothers and Babies - Uterine Balloon Tamponade’ device is an ultra low-cost, easy to use, safe and highly cost-effective package designed to address the number one killer of pregnant women in the world.

Postpartum hemorrhage (PPH) is the leading cause of maternal mortality in low- and middle-income countries. Although reduction of maternal mortality has been a worldwide focus since 1990, a recent World Health Organization report of 2013 described that PPH-associated mortality in India as 167 deaths per 100, 000 live births. The majority of these deaths could have been averted with timely access to quality emergency obstetric care.

Dr Burke is known for his low cost innovations for developing world. With his patent ESM-UBT device (comprising of a special catheter and condom), he is currently running a pilot study with MGIMS. Other institutes like JNMC Sawangi, IGMC Nagpur, GMC Nagpur, NPK Salve Medical Institute Nagpur, GMC Aurangabad, GMC Bhopal, Pravara Institute Of Medical Sciences Loni, GMC Chandrapur And PDMC Amravati too have joined hands with MGIMS. “The cost of the device is 400 Rs and is way too less as compared to alternative methods, including uterine devices, surgical interventions and hysterectomy”, said Dr Namit Choksi who worked as a Senior Advisor from Massachusetts General Hospital.

“MGIMS has always been working for reducing maternal deaths in and around Wardha. We are happy to note that we are able to reduce the deaths by 54%”, informed Dr Poonam Shivkumar Verma, Head of Obstetrics and Gynecology Department, MGIMS. “The project has been running for last one and a half years. 312 women of PPH in grade 3 and 4 shock were administered with ESM-UBT device. The device not only saved the bleeding women but also minimized the need of blood transfusion and surgical interventions”, she added. She also expressed her gratitude towards the Civil Surgeon, (DHO Wardha), Dr BS Garg (Secretary KHS), Dr N Gangane (Dean, MGIMS) and Dr SP Kalantri, (Medical Superintendent, Kasturba Hospital) in developing a comprehensive protocol for the project.

The Government of India and the Government of Maharashtra lauded the reduction in maternal mortality. Dr Dinesh Baswal (Deputy Commissioner of Maternal Health, Ministry of Health & Family Welfare India) decided to get similar devices made in India. “The ESM-UBT package is easy to use even in resource limited settings and seems promising in ending the many unnecessary deaths of our world’s mothers” said Dr Himanshu Bhushan (Senior Consultant and Advisor, National Health Systems Resource Centre).

Dr Thomas Burke and his team introduced a comprehensive management of PPH using bundle approach. This technique looks into the technical and non-technical components and it was utilized by 55 facilities in Maharashtra and MP. Dr Archana Patil (Additional Director, State Family Welfare Bureau, Government of Maharashtra) introduced this bundle in all major districts and Akola women's hospital is doing a great work. The bundles have reached in all 28 PHCs and 9 district and sub-district hospitals of Wardha. The decision of making Wardha district free of PPH deaths by 2020 was taken. In last 1 year and 3 month till June 2019, no death occurred in Wardha due to PPH. The helplines are created where ANM or ASHA from PHCs can talk directly to the doctors at tertiary centers and appropriate and timely referrals can be done. This innovation has increased awareness and early referrals are coming.” Informed Dr Verma

“The Government of India is keen to replicate this model at other states of India now”, informed Dr Garg. “The Government appreciated the efforts and was very happy to see that the model has significantly reduced the maternal deaths and other complications of PPH. The project has paved way for lot of awareness, capacity building and learning emergency management”, said Dr Verma