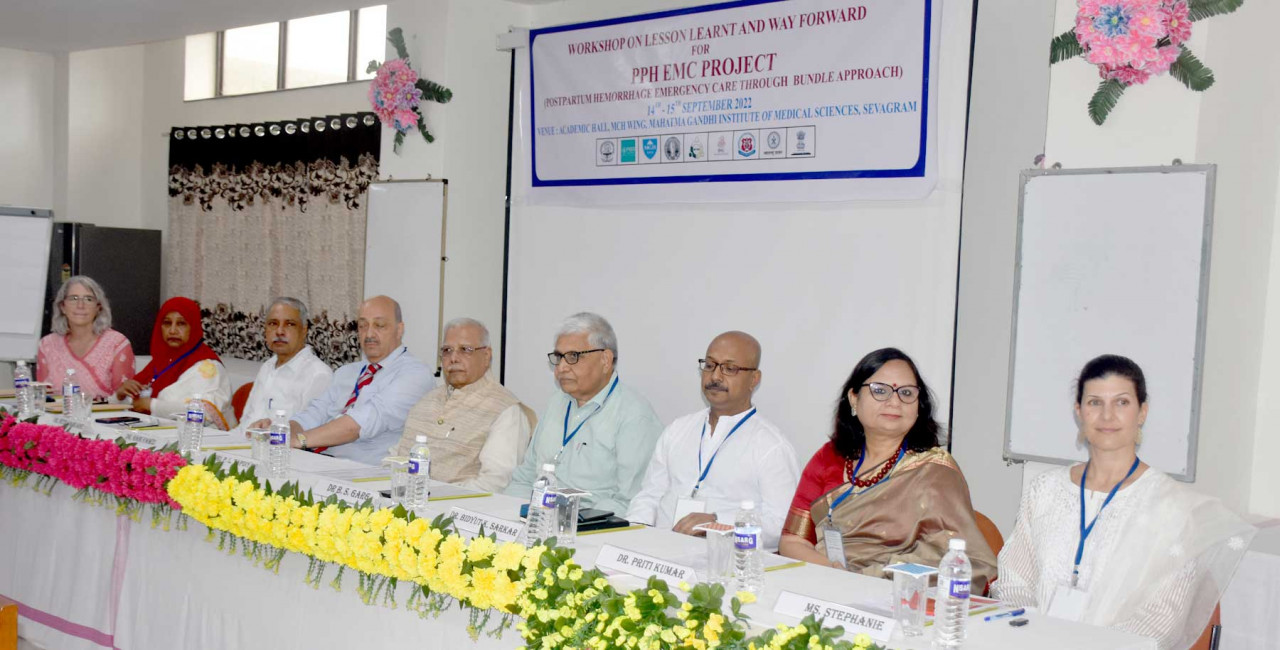 On 14 September 2022, the inauguration of the workshop on ‘Lesson Learnt and Way Forward for Postpartum Hemorrhage Emergency Care Using a Bundle Approach’ took place at MCH Wing of Mahatma Gandhi Institute of Medical Sciences (MGIMS), Sevagram, Wardha. This two-day workshop involves distinguished delegates from FIGO (UK), Massachusetts General Hospital (USA), FOGSI (India), Bangladesh, Uttar Pradesh, and MGIMS; who have been actively contributing to the reduction of maternal deaths due to postpartum hemorrhage (PPH) in India and neighboring countries. Shri PL Tapadiya (Vice-President, Kasturba Health Society) is the chief guest of the program.

MGIMS has taken an active role in reducing maternal mortality due to excessive bleeding during childbirth or postpartum hemorrhage. MGIMS collaborated with Massachusetts General Hospital and Harvard University and introduced comprehensive management of PPH using the bundle approach.

“I am happy to share that the study has shown a significant reduction in maternal mortality,” said Dr BS Garg (Secretary, Kasturba Health Society and Principal Investigator of the Project). The study can now be implemented in other places and we have gathered here to understand how can we scale up, advocate and make this research more sustainable”, Dr Garg added.

“What you see today is the testament to hard work and dedication of our team” recalled Dr N Gangane (Dean, MGIMS) while introducing MGIMS to the audience.

Dr Hani Fawzi (Director, FIGO – International Federation of Gynaecology and Obstetrics) said, “We have sown the seeds of sustainability in the area of PPH. MGIMS led the way and tackled the complexity of tasks involved at the community level”. FIGO is funding and supporting the project.

“With the success in the reduction of maternal mortality rate, we are now planning to disseminate the knowledge in the neighbouring countries like Nepal and Srilanka,” said Dr Priti Kumar (Chairperson of Safe Motherhood Committee) and representative of FOGSI (Federation of Obstetric and Gynaecological Societies of India). FOGSI is implementing the project in the states of UP, Bihar and Jharkhand.

“MGIMS with 11 other facilities has created a model for Maharashtra in which a significant decline in maternal death rate has been noted. This study is presented to the Government of India for implementation in other states as well,” said Shri PL Tapadiya. “The concept of Bundle approach is unique as it does not only take into account of the treatment part but also looks into capacity building of doctors, integration of facilities, team readiness, ambulance availability etc.”, Shri Tapadiya added.

“Women live and live with dignity”, says Dr Ferdausi Begum (President of OGSB, Bangladesh) to explain the motto of the study. “With the implementation of this study, UP has shown the fastest decline of maternal deaths over the last 10 years”, said Dr Biyut Sarkar (Director Health Facility Strengthening UP Technical Support Unit). Representatives from MGH Ms Stephanie and Dr Lori conveyed the best wishes from Dr Thomas Burke (Chief, Division of Global Health and Human Rights, Emergency Department, Harvard University) who is the man behind this project.

“We all have learned a lot while carrying out this program. The objective of the workshop is to learn from those lessons, plan a road map on how to disseminate the results; make the approach sustainable and reach the policy makers for its wide implementation”, informed Dr Poonam Varma Shivkumar (Head of Obstetrics and Gynaecology, MGIMS).

Dr Shuchi Jain (Professor of Obstetrics and Gynaecology, MGIMS) proposed the vote of thanks.