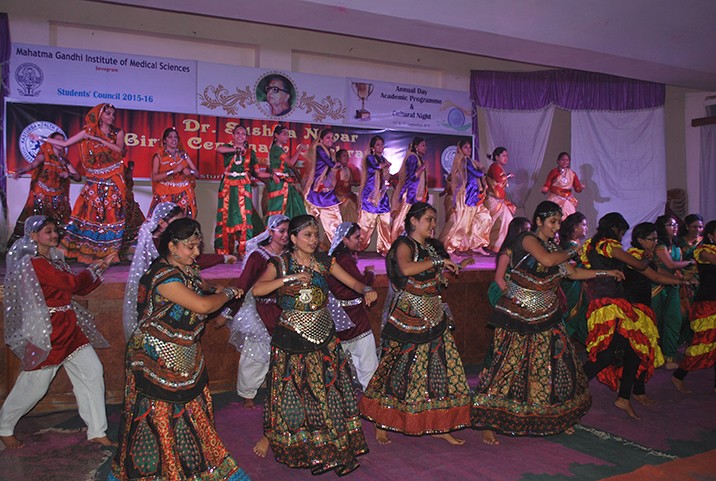 The students’ council 2015-2016 organized a welcome programme for the new entrants of 2015 batch students ‘The Alchemists’ on August 18, 2015. This programme was a blend of Introduction and the cultural items performed by the ‘The Alchemists’. The programme began with a melody ‘Heal the world’ followed by an upbeat traditional group dance ‘Nagade sang dhol baaje’, a duet ‘Udi nind aankho se’, a heart touching mime on ‘Corruption in college admissions’, female group dance ‘Zubi dubi’ and a group song ‘Baate ye kabhi na’, a traditional marathi dance ‘Lawani’ and solo dance ‘Manwa laage’ enthralled the audience. In between there was a burst of laughter through hilarious ads on ‘Chamku chamakdaar toothpaste’, ‘Parle G’ and ‘Washing powder nirma’ which was applauded by one and all. The program ended with a group song and a question answer round to select the ‘Mr. and Miss. Alchemist’. Amongst ‘The Alchemists’, Shivansh Yadav was awarded the title ‘Mr Alchemist’ while Apoorva Ghodichore as ‘Miss Alchemist’. Onkar Warambhe was labelled ‘Mr Smart’ and Priyanka Joshi as ‘Miss Confident’.

In continuation of Dr. Sushila Nayar Centenary Year Celebrations and on occasion of Annual Day of MGIMS, a grand cultural evening was organized on September 11, 2015 evening in the auditorium. The program started with puja dance on Shri Ganesha. A small act ‘Bapu ki Beti’ portraying Mahatma Gandhi and Badi Behenji Dr Sushila Nayar was performed giving a message- the seed that Bapu and Bahenji had sown has grown as a big tree giving fruits to the society. Students also expressed their dedication to wearing khadi by ‘Khadi round’ of fashion show. The unity and diversity of India was portrayed by a very well-crafted and directed interplay of colorful dances of various states of our country one after the other enthralling the audience. The Rajasthani folk dance, Goan dance, Bihu, Rass Garbha, Bhangda, Bharatnatyam, Kashmiri folk dance and Gondhal showcased the culture from Kashmir to Kanyakumari. A ‘Breathless classical dance’ performed by students confirmed that the classical talent existed in the medical academicians. The social illness of ‘Farmers’ suicide’ was brought to the forefront in the form of a skit and was very well appreciated by the audience. There was a music dance act wherein the students played instruments like flute, tabla and harmonium and also sung the classical song (Karnataki) based on which other two students also  presented the shades of Bharat natyam, making an altogether unique classical sangeet programme (blend of gayan, vadan and nritya). ‘Vande mataram dance’ made a patriotic aura for the audience. Several musical items were interposed in between the items giving no chance for the audience to have break. The evening ended with a very touching show offering “A tribute to the Indian army”, in which not only the audience but also the participants became emotional with the love and respect for this beautiful country its beloved ones who laid their lives to defend it.

An Intercollegiate debate competition was organized on September 12 in the fond memory of Late Smt Tara Devi, the beloved mother of our Badi Bahenji, Dr. Late Dr. Sushila Nayar, the Founder President, KHS and Director, MGIMS Sevagram.  The topic of debate was ‘Clean India Mission - Is it a viable solution to get rid of dirt?’. There was a thrilling participation of the speakers for and against the notion from 9 different colleges, perhaps the maximum participation ever witnessed from Wardha city. Dr. Ravi More and Dr. Shipra Singam, law faculty members from Yashwant Law College, Wardha judged the competition. MGIMS team comprising of Miss Divya Dixit and Miss Shubhra Chhazed was adjudged as the Best Team and won the running trophy. SP Dental College team was adjudged as the runners up team and was handed over the trophy as per the tradition. Miss Shubhra Chhazed from MGIMS was adjudged as the Best Debater against the notion while Miss Divya Dixit from MGIMS and Miss Simran Sangani from SP Dental College tied up for Best Debater position for the notion. The programme was graced by Shri Dhirubhai Mehta, President KHS, and Dr K R Patond, Dean MGIMS Sevagram and faculty members from different institutes. Awards were honored to the winners in the hands of Shri Dhirubhai Mehta, President KHS.

An academic prizes distribution programme was held on the foundation day of our Institute, September 12. Shri Ashutosh Salil, IAS, Collector Wardha district, was the chief guest. Shri Dhirubhai Mehta, President KHS, Shri P L Tapadia, Member Trustee KHS, Dr B S Garg, Secretary KHS, Dr K R Patond, Dean MGIMS, Dr S P Kalantri, MS Kasturba Hospital shared the dais with the chief guest. Dean welcomed the audience and presented the academic report. The academic awards were announced and honored to the students in the hands of the Chief Guest and the other dignitaries on the dais. ‘Sushruta’ the college magazine, was released in the hands of the Chief Guest on this occasion. Shri Dhirubhai Mehta delivered the presidential address followed by an address by the Chief Guest of the function. Mr. Hardik More and Mr. Shiv Joshi, the outgoing GS and CS of the MGIMS students’ council 2014-15 presented the council report and vote of thanks respectively.

Amongst those who bagged the awards and colors were:

The Ganesha festival started with the installation ceremony on September 17 in the auditorium. The occasion was graced by Dr B S Garg, Secretary KHS and Dr K R Patond, Dean MGIMS and faculty members of the Institute. Different events like Garba, Bhajans, Rangoli, Painting, Kavi sammelan etc were organized on the first two days of the occasion and on third day, September 19, the idol was taken to Pavnar in an energetic and boisterous procession for its immersi­on.