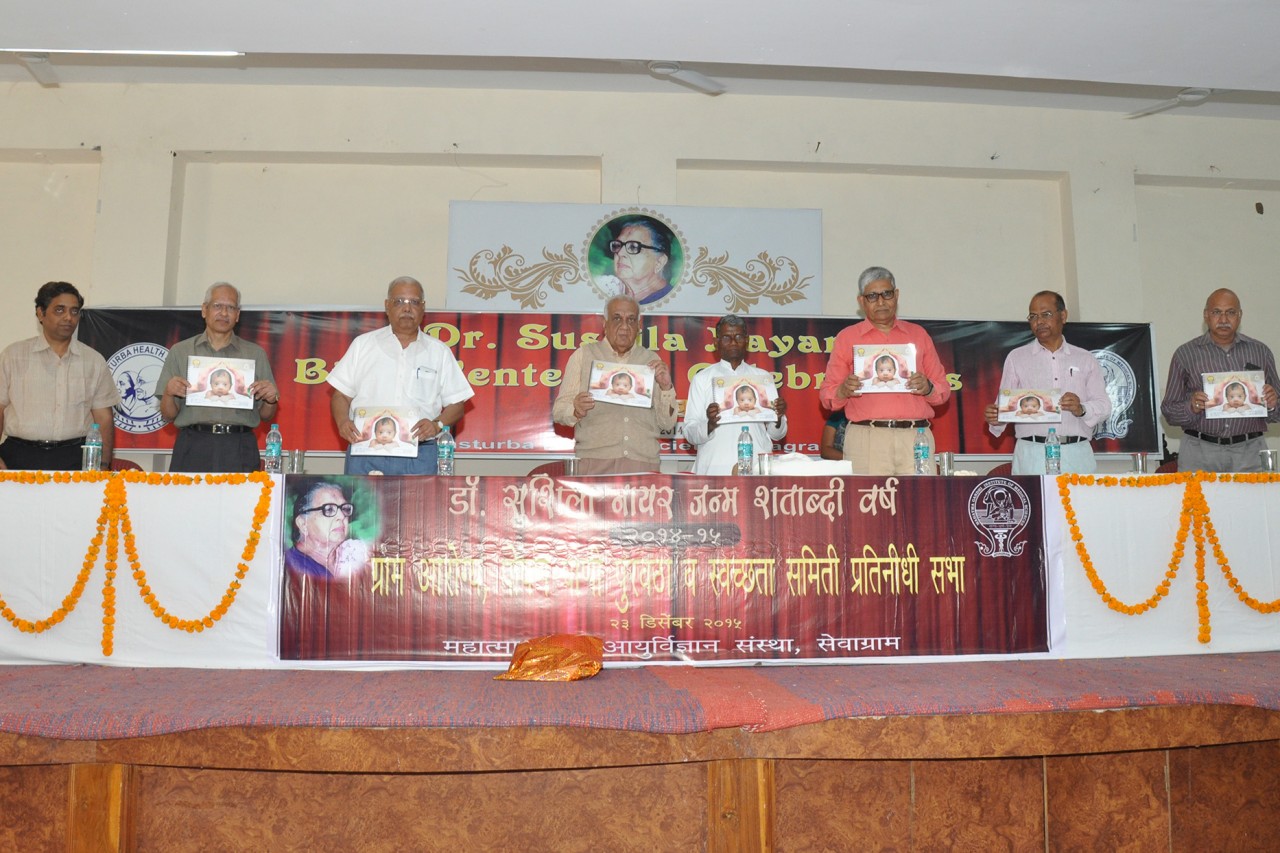 This activity was attended by 210 members of Self-help groups of women from 24 villages of Talegaon Talatule PHC area. The Chief Guest of the function was Ms. Smita Patil, Addl Superintendent of Police, Wardha.

The program comprised of a series of lectures, discussions, drama, role plays, puppet shows, and songs. During her talk, Ms. Smita Patil expressed her concerns on the rising suicide rate among women. Dr Chetna had an interactive session on nutrition and health of the women, while Dr. Abhishek Raut informed the group on how to prevent vector borne diseases and Dr. Snehal Kasare informed them on how to identify breast and cervical cancer early. The members of SHG also participated actively in the program and did a role play on ‘Save the Girl Child’.

Objectives of the Mahila Melava were introduced to the gathering by Dr. Abhay Ambilkar. On this occasion Dr. Subodh Gupta remembered work and views of Dr. Sushila Nayar in empowering the community. This was followed by a skit performed by The Kishori Panchayat of Mandwa based on the theme “Female Foeticide” and “female empowerment”.

Social Scientist Mr. Pramod Bahulekar had an interactive session with the gathering on changing role of women in society. Mrs. Mukta Kulkarni on behalf of Manager, Bank Of Maharashtra, Anji explained importance of savings and gave valuable information on various bank loan and pension schemes. Advocate Anita Thakare addressed crowd about law on Harassment of Women at workplace and promised to extend hand of help to the women in need anytime. Another skit performed by the B.Sc. Nursing students From Kasturba Nursing College based on prevention of non communicable diseases like Diabetes, Cancer and Hypertension. The program was hosted by Mr. Vinod Yenurkar and vote of thanks given by Mr. Abhay Ghodkhande. In this programe, posters with health messages were displayed to encourage the participants about healthy day to day practices.

One hundred and fifty adolescent girls participated in this activity conducted at Salod. Mrs. Vidyatai Raikwar; Dr Raviraj Kamble, Vina Gabhane, Pravin Bhusari and Sinil Lohe explained to the adolescents  a series of physical, emotional , psychological changes that occur in adolescence and how to cope with them.  Adolescent girls were also screened for sickle cell anaemia in this camp.

VHNSC  Melava was organized at Kasturba Rural Health Training Center, Anji (M) under guidance of Department of Community Medicine, MGIMS, Sewagram. Dr. Abhishek Raut, (Asst. Prof. Dept of Community Medicine, Sevagram), Dr Zode (MO PHC, Anji) and Mr Jagdish Sanchariya (Sarpanch, Anji) spoke on the occasion. The program attended by 75 members of VHNSC from 20 villages in the field practice area of KRHTC, Anji. Objectives of the VHNSC Melava were introduced by Dr. Abhay Ambilkar (I/C KRHTC). Mr Sanchariya, sarpanch had expressed the need of such events and motivated the audience to become agent of change in the society.

Dr Abhishek Raut appreciated the achievements by VHNSC Members and gave valuable guidance on what further can be done to sustain these achievements. He spoke on Community based Monitoring and explained with examples the way to improvement ahead.

Dr Zode medical Officer, PHC Anji informed the participants about immunization initiatives by the government. He spoke about Routine immunization, Mission Indradhanush, Pentavalnet vaccine and urged that all this information to be percolated in community through the audience. Dr Abhay Ambilkar explained in detail about forthcoming ICMR based project -“Pregnancy Cohort’ and urged to pass on the information in the community.Mr. Vinod Yenurkar explained the participants about Health Insurance scheme of Kasturba health society and had a wish that every family gets benefit from it.

A geriatric meet - Vrudh Nagrik Melawa was organised by the urban Health Training Center at Matoshree Vrudhashram, Singhi (meghe), Wardha. Attended by about 50 elderly men and women, there were talks about the problem of diabetes in elderly by Dr Chetna Maliye, hypertension in geriatric age by Dr Ashwini Kalantri and on mental illness in elderly by Mrs Narula. There was a skit by the research workers of the UHTC on the plight of the elderly. Mr Pramod Bahulekar spoke on the need of attention towards the elderly.

Close to 100 men and women (members of the Village Health, Nutrition, and Sanitation Committees) representing two primary health center areas of MGIMS Sevagram (Kharangana Gode and Talegaon) gathered to participate in, and share their experiences in the MGIMS auditorium. Mr. Devaji Tofa, the headman of the nondescript Mendha (Lekha) village in Maharashtra's Gadchiroli district, and one of the leaders of the villagers who had the courage to declare that they were the mien of their own destiny spoke on the occasion. “In our village, we are the government,” he explained and challenged the audience to pick up the gauntlet. In spite of being a very soft-spoken person who has studied only up to the fourth standard, Mr. Devaji—a picture of fierce determination and fearlessness—seemed to be well aware of the present political scenario. On this occasion, a pictorial booklet, prepared by the Dr Sushila Nayar School of Public Health was released- the booklet tells villagers how to care for a newborn. Mr. Dhirubhai Mehta, Mr. PL Tapadiya, Dr BS Garg, Dr KR Patond, Dr SP Kalantri, Dr Subodh Gupta and Dr Abhishek Raut also spoke on the occasion.