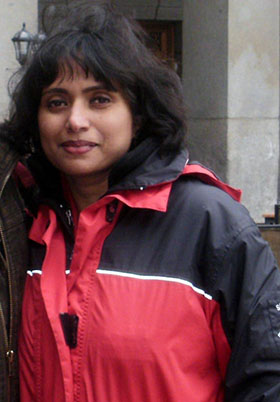 A 1985 batch alumnus, Sadhana completed MD (Community Medicine) in 1993.MGIMS has played a pivotal role not only in her choice of specialisation but also in her areas of expertise as a public health physician. True to her alma mater roots, Sadhana has a deep commitment to tackling health inequalities arising from wider socio-economic factors and in alleviating chronic poverty in rural central India. Similarly, her interest in cancer prevention is the result of a six months SHO posting in Otorhinolaryngology at MGIMS in 1991. During this period, Sadhana came across scores of late stage tobacco related head & neck cancers - all were painful and with poor clinical outcomes. An oft-repeated regret by end stage patients was ignorance of the harmful effects of tobacco. Preventing common cancers and tobacco control have since dictated her career choices.

From 1995- 1997, as Consultant in Preventive Oncology (Tata Memorial Hospital) she developed the then fledgling department of Preventive Oncology with direct accountability to the TMH Executive Director and introduced innovative initiatives like Cervical Dysplasia Clinic, population awareness for the metropolis, and a hospital based tobacco cessation programme which went on to become a WHO ‘example of good practice’ for Indian settings.

Her interest in cancer epidemiology led Sadhana to Oxford (UK) where she was awarded the Certificate of Specialist Training in Public Health Medicine in 2002, following a five years training programme. Sadhana has since worked as a NHS Consultant with special interest in cancer control and health inequalities at national and international levels. A Fellow of the Faculty of Public Health Medicine (UK), her notable contributions to NHS research include chapter editor for the English CMO Annual Report (2011) under the leadership of Dame Sally C. Davies, public health expert on the national working group to the National Advisory Group on Hepatitis (2008), expert deputised in 2008 from NHS (UK) to PHFI (India) to advice the Indian government on implementing smoke free legislation.

A visiting lecturer at Oxford University since 2002, Sadhana is also an accredited postgraduate trainer, registered mentor. She became an appraiser in 2013 for the GMC medical revalidation/ fitness to practice programme, following an invitation to train on the National Peer Appraisal Training Programme. In July 2014, Sadhana moved to the Department of Medical Education, Curtin University (Western Australia) where new opportunities await.